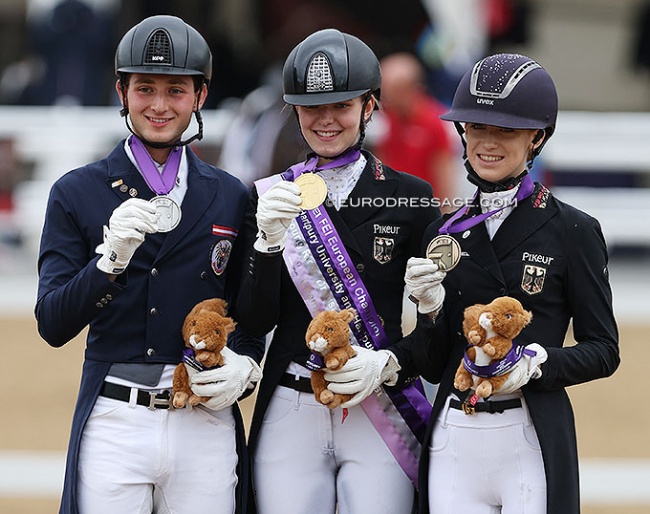 German Helena Schmitz-Morkramer made it a triple victory at the 2022 European Young Riders Championships in Hartpury on Saturday morning 30 July 2022. After winning team and individual test gold, Schmitz-Morkramer also persevered in the freestyle and topped the board, claiming her third gold medal of the weekend.

The silver went to Austrian Paul Jöbstl while bronze was for German Lucie Anouk Baumgurtel.

The 2022 European Young Riders Championships came to a conclusion Saturday morning, while also the cross country phase kicked off at Hartpury, which was hosting the European JR/YR Championships for eventers at the same time. There was more business around the dressage arena and trade fair, the wind had picked up a bit, and the sky was heavily overcast again like all previous days (except Friday afternoon), though it didn't look like rain.

Traditionally the Kur finale begins with the juniors and works towards a climax with the higher level young riders, but in Hartpury they decided to switch that around. The judges' panel remained to be the four headed group of Maarten Van der Heijden, Evi Eisenhardt, Stephen Clarke, and Alice Schwab, as American Jane Weatherwax fell ill before the individual test and the president of the ground jury (Clarke) and the FEI decided not to bring the non-travelling reserve (Olivier Smeets, Belgium) to the scene.

Reflections on the Freestyle

Often when a rider wins the team test and reconfirms their top shape in the individual, a disastrous ride needs to happened to knock them off their first place. Winners of previous days also seem to be given some leeway when it comes to making mistakes before their points drop to such a level that they lose their podium place, it seems.

Thinking back to the freestyle finale yesterday - both young riders and juniors - it is a very difficult task to sort out the podium as the level of riding was really high but at the end of the Championships and after a long travel to the U.K. some horses appeared a bit tired or distracted and were not on best form. It makes one wonder how important really good music is? Some riders performs to the most nondescript background music that has no effect and leaves no memory at all. Others pull out all the stops and have a funky freestyle that is catchy, a real beat, and brings a sense of fun to the class. Those are the memorable ones that should be rewarded for it. And then there is a small group which rides to excellently produced music of which you can hear the quality level of investment that went into it, but that are just "blah". No story is told, no emotions are stirred.

Helena Schmitz-Morkramer for sure stood out with the level of training and presenting her horse, but they were not faulfree in the freestyle.

Riding to drum based music which highlighted the rhythm of her 12-year old Brandenburger gelding (by Lord Fantastic x Samba Hit), Schmitz-Morkramer was the last starter to go and had to beat Austrian Paul Jöbstl's whopping score of 79.206%. She began her test with canter work and immediately had a mistake in the tempi changes on the centerline. Another hiccup in the changes followed in another line. Helena rode to a good degree of technical difficulty which included canter half passes followed by half pirouettes. The extended walk had good marching and overtrack though the clarity was not ideal. In the half pass to the left the tongue flashed out of the mouth for a moment, but overall the bridle contact was steady. The trot work stood out with the cadence.

Leaving the arena it was far from certain that the ride would be a golden one considering the mistakes, but no less than 80.419% flashed on the board for the victory. Two judges had her first, two second with their marks ranging from 78.250% (Eisenhard) to 82.375% (Clarke).  A look at the break down of the scores shows that the judges' average score for the tempi changes was between 5 and 8 for the one set of tempi changes and between 6.5 and 8 for the other set. A clear difference. Training wise Lifestyle was very consistent and well balanced in her presentation. The contact was quiet, though could even be a bit lighter at times. The pair trains with Sonja Ellerbrock.

Their 80% score earned the pair their third gold medal of the week and the title of overall European Young Rider Champion (although no official medal is given for the overall champion).

Jöbstl from Bronze to Kur Silver

Austrian Paul Jöbstl gave it his all in the freestyle finals aboard Josef Wilbers' 13-year old Hanoverian stallion Bodyguard (by Burlington W x Pik L). With probably the catchiest music of the day, riding to Elton John's Rocketman and I'm Still Standing, he certainly brought atmosphere for the spectators sitting on Hartpury Hill.

The pair also began in canter with tempi lines, counter canter, voltes, circles and half pirouettes. One change was short behind and in general the changes to the  right were more fluent than those to the left. The extended walk was very nice with an outspoken clarity in the 4-beat rhythm. In the collected the rhythm was secure but the horse lost some elasticity in the back. Bodyguard lost some of his self carriage towards the end of the test, which showed in the difficult transition from the right to the left trot half pass and in counter canter the balance faltered. Still Jöbstl finished very strongly on the final line.

His 79.206% earning score seemed enough for gold, but it wasn't. He ended up with a silver medal, which is one step up from the bronze he got for the individual test. One judge had him as winner, one judge second (80.875% high score from Dutch judge Van der heijden) and the other two third (77.575% low score from Austrian judge Schwab). Jöbstl is coached by Swiss team trainer Oliver Oelrich.

Jöbstl in fact swapped podium placed with German 18-year old Lucie-Anouk Baumgurtel, who had silver in the individual test. The 2021 European Junior Riders Championships decided to already compete at Young Riders level in her last year as a junior and her choice paid off. She won team gold on the second day of competition and went on to add to more medals to her collection.

Lucie rode to instrumental music from Frozen as well as classical music. With her 10-year old KWPN gelding Hugo (by Spielberg x San Remo) she began with very nice trot half passes - at times tight in the neck - and good rhythm and impulsion overall in the lateral movements. The four tempi changes were straight and the canter work was precisely delivered but at times appeared a bit flat and straight legged.

There was a lot of debate after the class if there were other riders in the pack that deserved a podium place. it's hard to tell as all of them were neck-to-neck with one another.

A very exciting pair for the future is Austrian Felicita Simoncic on the young and incredibly talented 9-year old KWPN gelding Ivar D.E. (by Ampere x Olivi), which her family bought from Dutch Ilse van Cranenbroek last January. The Austrian pair rode to great music from Dinsey's Moana which included for touches and a cheeky final thank you for waching quote. The trot work was nicely cadenced, the extensiosn were well ridden, but the shoulder-in was overasked and executed on almost five tracks. Simoncic rode the tempi changes on half circles. The extended walk was good, the collected could have been clearer in the rhythm. In the final right extended canter, the horse lost some suppleness in the back (which shows in the loss of three beat striding). Still, it was a very attractive test and maybe with a bit more "overall ease" (less hectic), they would have certainly finished on the podium.

This time they were very close with 78.313% for fourth place, but it could easily have been a medal as one judge had them second (80.125 Clarke), two judges third (Van der Heijden and Eisenhardt), but it was Austrian judge Alice Schwab who saw only a 75.575% in the right and 8th place.

British Jessica McConkey continued to thrive on home turf in Hartpury aboard her 13-year old Danish warmblood mare Lady Gaga (by Quaterback x Solos Landwind).  After surprising herself with a fourth place in the individual test (with a little help from the British judge who had them as the high score), McConkey ended in fifth place in the freestyle.

The theme song of The Last of the Mohicans set the tone at the start of her ride. The straight tempi changes and outstanding extended walk were the highlights, but the canter half pass was rather stiff and in trot the mare totally lost the forward motion and became too passage on the voltes and counter bent on the right volte. The trot extensions were very ground covering and had much suspension though. They finished with a one-handed extended trot which was crooked though.

McConkey, who trained with Anne van Olst over the winter, but returned to the U.K. to find fresh inspiration and motivation with Paul Fielder and Amy Woodhead, scored 77.381% to complete the top five. Her marks went from 75.750 (8th Eisenhardt) to 79.000 (4th Van der Heijden).

The 2022 European Young Riders Championships concluded with a medal ceremony in the afternoon. Next year the young riders will have to travel to Pilisjaszfalu, Hungary, for their European Championship which will be combined with the Under 25s.