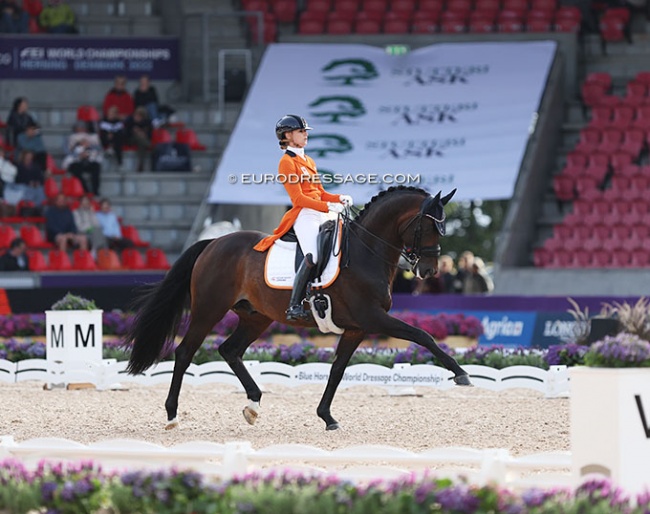 - Text and Photos © Astrid Appels (this article expresses Appels' eye-witness account and opinion about the competition).

Dutch Dinja van Liere became the overnight leader in the Grand Prix team championship on the first day of competition at the 2022 World Championships Dressage in Herning (DEN) on Saturday 6 July 2022.

From WEG Back to World Championships

The FEI had to let go of its World Equestrian Games concept after a string of WEGs proved to be financially unsustainable for its organisers.

Launched in 1990 in Stockholm and held every four years since then, bringing all FEI disciplines to one venue, only the 2006 edition in Aachen put money in the wallet. For all the other OCs it was a  loss. The last WEG edition in Tryon, USA in 2018 became a true eye-opener for real estate mogul Mark Bellissimo who bit off more than he could chew, but his Tryon Equestrian Center was still under major construction when the show started, the Grand Prix freestyle was cancelled due to hurricane Florence, and the logistical drama during the endurance phase was the straw that broke the camel's back.

The World Equestrian Games concept was ditched and it was back to an old World Championship format. The city of Herning and the Danish Equestrian Federation joined forces and won the bid to host the dressage, para dressage, vaulting and show jumping World Championships in Denmark after they had already proved their worth hosting the European Dressage and Jumping Championships here in 2013.

The show grounds are impressive: spacious, convenient, and well equipped with the horse in mind. Purple is the running theme with huge banners with the official FEI colour placed everywhere. The arena is meticulously landscaped with wonderful flowers - mainly campanula, hydrangea and lavender - to keep the purple theme going. The purple really pops in contrast with the red seats in the football stadium and it just creates the most magical canvas for equestrian photography. Us photographers (and journalists) are happy campers here.

Van Liere Puts Holland Back in the Picture

Leading up to the World Championships, a line-up of combinations and teams makes up for a than predictable competition. Only one pair - Dufour and Vamos Amigos - are considered the hot favourites for gold - but for the rest the field is wide open and anything can happen.

The Dutch team relies on four ladies with much show experience, but two of them are team rookies (Zweistra, Van der Putten) and the other two horses that are also team debutants (Hermes, Indian Rock). For more than a decade the Dutch team had Edward Gal and Hans Peter Minderhoud as stalwarts in their foursome and it almost seemed unimaginable that Team Orange would uphold without them. This was certainly proven wrong after the first day of competition and the Dutch certainly can stand on their own without Gal/Minderhoud, even though the sympathetic duo is here on the spot coaching three of the four team riders, while team trainer Alex van Silfhout seems to stand idle on the sideline.

In what appears to be a strategic move to make an impact on the judges, the Dutch team fielded their highest scoring rider on the first day of the Grand Prix and their decision paid off.  Dinja van Liere and the 10-year old KWPN stallion Hermes (by Easy Game x Flemmingh), owned by Joop van Uytert and investor Jan Anker, achieved the high score of the day of 78.83% and had put The Netherlands into the lead of the team ranking, for now.

The pair looked on very strong form with a piaffe on the spot with a very active rhythm, but he could lower the croup even more. The extended walk was good, although the passage-walk transition was abrupt via halt. The trot tour was energetic but there was no clear differentiation between the medium and extended trot, both were ridden full throttle. The canter work was high class with secure two tempi changes, a ground covering zig zag, and a strong extended canter. Hermes is quite active with his tail and the left pirouette was hesitant. The only blip in their test was the piaffe at X where the horse overreacted to the aids with the hindlegs.

Van Liere led the Dutch charge, assisted by Thamar Zweistra on the 9-year old KWPN bred Hexagon's Ich Weiss (by Rubiquil x Negro), who produced a secure round with especially the canter tour standing out. They ranked 9th with 72.376%

Olympic and European champion Jessica von Bredow-Werndl passed up the opportunity to become the winner of a very rare "Triple Crown" (World, European and Olympic champion on the same horse) as she is due to give birth to her second child. This opened up room on the German team for her brother Benjamin Werndl to move into the slot aboard Flora Keller's 13-year old Oldenburg gelding Famoso (by Farewell III x Welt Hit II).

As penultimate rider to go on day one, the pair showed off where their worth lies: in harmony. The muscled bay gelding showed a true differentiation between the medium and extended trot and smooth half passes. The passage was bouncy and regular, and the first piaffe was correctly on the spot. The extended walk had good overstep and the collected walk clarity of rhythm. Also in canter the pair stayed secure with good zig zags and two's. Only the one tempi changes could be more ground covering and the exit of the pirouette left lacked polish. They completed their test with a lovely final pi-pa centerline and square halt even though the audience was already clapping in excitement.

The stadium in Herning has a capacity of 11,400 people and was filled maybe 1/3 or half with a very enthusiastic crowd that couldn't hold their excitement and clapped on the final centerline for the pairs they really loved. The first to initiate the clapping was, naturally, Danish Nanna Merrald, and the second they got thrilled about was Spanish duo Alejandro Sanchez del Barco (Quincallo de Indalo). The last session of riders with the more "famous" combinations all got clapping at the end and they even gave a "consolation clap" for the last to go, American duo Ashley Holzer and Valentine, who had an off day as the mare reared in the piaffe. The clapping did not help to settle the horse down, unfortunately.

Werndl's 77.003% score for a second place but Germany in the silver medal position, so far. Germany's fourth rider, Ingrid Klimke and Wilhelm Holkenbrink's 14-year old Hanoverian stallion Franziskus (by Fidertanz x Alabaster) silenced the doubters with a personal best ride and score. Klimke, a multiple medal winning eventing champion, truly testified that she is made of equitation gold as she can equally be a pillar for the German dressage team! Her late father Dr. Reiner Klimke, the 1982 World Champion on Ahlerich, would have been proud! The temperamental Franziskus, who is known for throwing in some testosterone fuelled antics, was focused on his rider and did a good job. Always steady in the contact and nicely foaming, Franziskus stood out with lovely piaffe work and good one tempi changes. Their halt for rein back was absolutely textbook perfection. Franziskus is maybe not the most elastic horse, but showcased what classical dressage training can do to transform a horse into a Grand Prix star.

With Dufour being the only Grand Prix rider this 2022 season to score 80% in a Grand Prix test and its other team riders capable of achieving 75 - 77% mark, Denmark is the clear favourite for gold on home turf at these Championships.

Carina Cassoe Kruth and the 11-year old Danish warmblood mare Heiline's Danciera (by Furstenball x De Niro) certainly enjoyed riding in front of the home crowd, which cheered the hardest for her. Her black mare, owned by Poul and Ingrid Thogersen, is such a highly quality horse with three exceptional basic gaits. Her brilliant walk alone puts big scores on the board. The trot extensions are huge and energetic, with little difference between medium and extended trot. The left half pass had the better rhythm though. The passage was ridden very forward today, a bit hectic at times. Unfortunately in piaffe Danciera underwhelms. She leans on the forehand, crosses the hindlegs and nervous trembles her lip from tension. The canter work had many highlights again, with lovely one tempi changes and an uphill extension. The judges rewarded the test with 76.863%. The low score was 74.348% (Saleh), the high score 78.043% (Umbach). Kruth placed third so far.

Danish Nanna Merrald Rasmussen - who dropped the Skodborg part in her last name as she recently got married to Jesper Rasmussen - landed fourth place with the 18-year old Blue Hors Zack (by Rousseau x Jazz). Her selection with team routinier Zack raised question marks as the 18-year old had done only one show this year, the Danish National Championships, but good old Zack is like red wine, it only gets better with age. The stallion appeared incredibly fit and fresh in the arena. He produced strong trot extensions, sweeping half passes, a good rein back. Some of the passage steps could have been more even and in the second piaffe the horse travelled forward. The tempi changes were big and uphill. They posted 76.724%

Although Holland, Germany, and Denmark now standing in the top three team spots, the competition is still wide open and the field will certainly be reshuffled when the second group of Grand Prix riders compete on 7 August.

Sweden's Juliette Ramel and her 16-year old Swedish warmblood gelding Buriel KH (by Osmium x Krack C) scored on their usual strongpoints: the regular piaffe-passage and the fabulously uphill canter work with massive flying changes and wonderful pirouettes. The gelding did appear a bit high strung, was sweating more than the other horses and the clapping also unsettled Buriel a bit. Ramel posted 76.165% for fifth place.

Great Britain should certainly not be forgotten in the mix with Dujardin and Fry still to come. Gareth Hughes and his own and Julia Hornig's 16-year old KWPN mare Briolinca (by Trento B x Royal Dance) scored 75.978% for sixth place so far. The bright bay mare put on a lovely display of elegance and lightness. The trot extensions are a bit stiff in the topline though, but the passage is lightfooted and regular. The extended walk was limited in overtrack and lacked some stretch forward and the collected walk was quite short. The one tempi changes were super straight and the left pirouette was more expressive than the right one. They did not do a proper end halt as the clapping of the crowd made the horse piaffe.

Spain has brought a new sensation to Denmark: team newcomer and Grand Prix rookie Alejandro Sanchez del Barco on the 11-year old PRE stallion Quincallo de Indalo (by Esbelto VII x Bandolero LXVII ). The grey is cute as a button and looks very ponyesque, but has the movements to impress. Not a stitching machine, but properly moving with ground cover, Quincallo produced tiny pirouettes, a good zigzag, and straight one tempi changes. The whole test looked soft and easy. They scored 72.842% for 8th place.