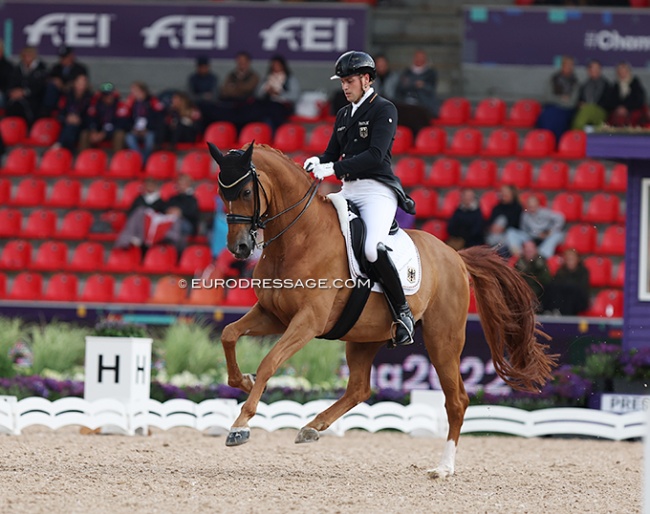 Frederic Wandres has announced his withdrawal from the Grand Prix Special at the 2022 World Championships Dressage in Herning (DEN) on 8 August 2022.

Wandres and Hof Kasselmann's 15-year old British Hanoverian Duke of Britain (by Dimaggio x Rubinstein) won team bronze yesterday and placed 9th with 76.661%. The pair had previously scored 78.020% at the first German team selection trial in Balve and 77.217% at the second trial in Aachen.

The German equestrian federation announced his withdrawal 10 minutes before the start of the Grand Prix Special in Herning.

"After the morning check we decided this," team captain Klaus Roeser explained in a press release. "It's regretful for Frederic and the German team, but the welfare of the horse comes first."

To German equestrian magazine Reiter Revue Wandres explained that "Duke cast himself in the stall last night. For the good of the horse we decided this morning not to compete him. For the task of the day he is not fit enough. It's such a great pity, but Duke's health goes above all."

The withdrawal was less than two hours before the class started, which meant that the 31st ranked rider in the Grand Prix - Marieke van der Putten on Torveslettens Titanium (by Totilas x Stedinger - could no longer be called up to replace them.