Melli's Glückskeks and Neverland are the 2022 Bundeschampionate Dressage Pony Champions 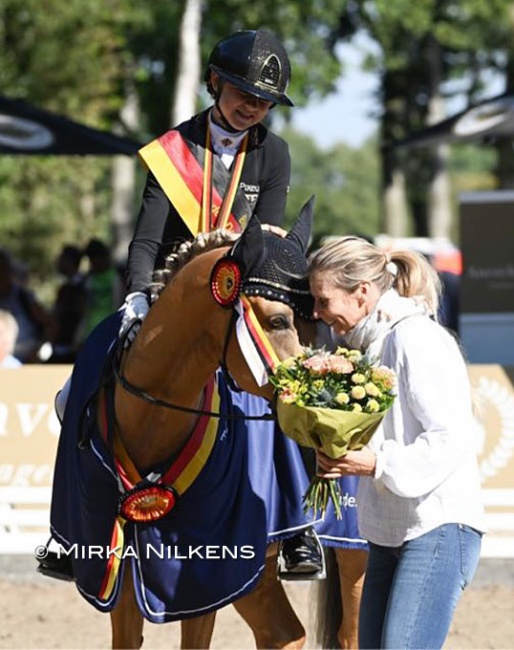 The 5-year old Melli's Glückskeks and the 6-year old Neverland became winners of the titles in the dressage pony divisions at the 2022 Bundeschampionate in Warendorf.

The finals classes for these age divisions were both held on Sunday 4 September. No less than 40,000 people had travelled to Warendorf from 30 August - 4 September to attend the German Young Horse Championships for ponies and horses in dressage, show jumping, and eventing.

Thirty-two ponies competed in the 5-year old dressage pony class, which consisted of a qualification round. The top 12 of the qualifier moved directly to the finals round and the top three of the consolation class was also eligible to return for the finals the next day.

A runner-up in the preliminary round, German junior team rider Carolina Miesner delivered on the day that it mattered and won the champion's title aboard Melanie Petermeier's stallion Melli's Gluckskeks (by Golden West x Golden Dancer). Judges Kerstin Holthaus,  Ulrike Nivelle, and Katja Westendarp favoured this duo and rewarded the test with a total of 8.9 point. The palomino stallion got 8.5 for walk, 9.5 for trot, 9 for canter, 8.5 for submission and 9 for general impression. Melli's Glückskeks is bred by Melanie Schierholz and in 2020 he was ridden by Vivien Lou Petermeier to an 8th place at the Bundeschampionate. In 2021 Katharina Tünemann-Rohlfing was 7th with the pony in Warendorf.

Former German pony team rider and already a professional at age 17, Antonia Buch-Kuffner, landed second place and the silver medal with a total of 8.7. The pair had won the preliminary round, but got bested in the finals. Aboard Danica Duen's palomino stallion Herzzauber D (by Herzkönig x Casino Royale K), she scored 9 for walk and canter, 8 for trot, 8.5 for submission and 9 for general impression. Last year Herzzauber won the Bundeschampione's title under Danica Duen. They had bronze in 2020.

German based Italian international pony rider Virginia Spönle got the bronze aboard Josef Wilbers' home bred stallion FS Next Diamond (by FS Numero Uno x FS Don't Worry). The pair posted 8.3 for third place and got 7.5 for walk, 9 for trot, 8.5 for canter, 8 for submission and 8.5 for general impression. Spönle and Next Diamond were also third in the preliminary round. This is the third medal in a row for FS Next Diamond: under Marina Welbers he got silver in 2020 and bronze in 2021 at the Bundeschampionate.

With only 16 combinations contesting the 6-year old dressage pony class, the field was rather small this year. This division is considered the fishing pond from where numerous hopefuls for international FEI pony level are caught.

Sophie Duen did not let go of that number one position she claimed in the preliminary round on her mother Danica Duen's licensed stallion Neverland (by FS Numero Uno x Champus K). They won the qualifier with 8.3 and improved in the finals to a total of 8.4 for the victory. Bred by Reinhard Kramer, the Weser ems registered stallion got 9 for walk, 8.5 for trot, 8 for canter and submission and 8.5 for general impression from judges Henning Lehrmann Pascal Strohbücker, and Klaus Storbeck. Last year Duen had bronze with Neverland at the 2021 Bundeschampionate. In 2020 the stallion was retired from the 4-year old riding pony stallion final but in 2019 he was third.

Italian Virginia Spönle also scored a silver medal aboard Josef Wilbers' stallion FS Clarimo (by FS Coconut Dream x FS Don't Worry). Bred by Hubert Fockenberg, the bay stallion got 7.5 for walk, 8.5 for trot, 8 for canter, 9 for submission and 8.5 for general to become the runner-up with 8.3 in total. The pair was also second in the qualifying round. FS Clarimo was fourth in 2019 and 2020 under Janine Driessen and 10th in 2021 under Mia Alegra Lohe.

Leonie Honnefelder also kept a firm hold on that third place from the qualifier and moved on the bronze medal step of the podium in the Finals with 8.1 in total. Aboard the Hartmann family's palomino mate Glücksengelchen (by Hesselteich Golden Dream x FS Don't Worry) she received 8.5 for walk, 8 for trot, 7.5 for canter, 8.5 for submission and 8 for general impression. The mare is bred by Agnes Beckhoff. This pony had silver in 2020 under Wibke Hartmann-Stommel and was 14th in 2021 under Maja Osterhaus.