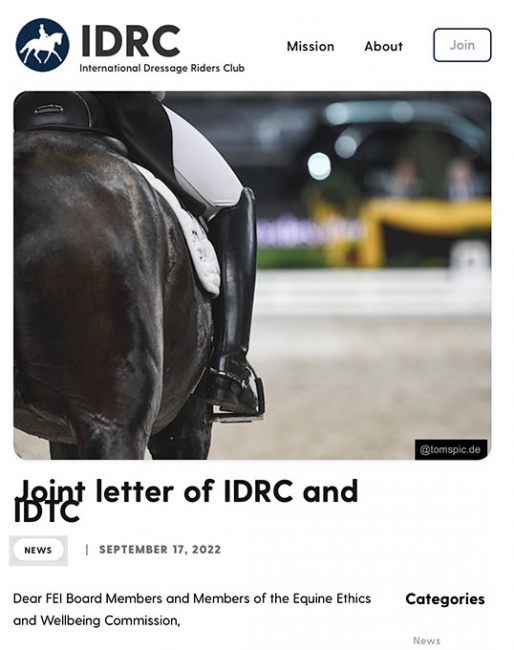 The letter was posted on the official IDRC website on 17 September, but when Horse & Hound issued an article titled "‘Controversial’ proposal around double bridles and spurs sparks debate," the IDRC quickly removed the letter from its website.

Horse & Hound wrote that, the joint letter was in written in response to "a number of recommendations the Equine Ethics and Wellbeing Commission made to the FEI in August for “internal discussion”, including the possibility of making double bridles optional in grand prix dressage – and spurs optional in all FEI disciplines."

Joint letter of IDRC and IDTC

Dear FEI Board Members and Members of the Equine Ethics and Wellbeing Commission,

We understand that there is discussion around making the double bridle and spurs optional for Grand Prix dressage tests. We respectfully ask you to consider the input of the primary stakeholders regarding this proposal.

Yes, the misuse of the double bridle can lead to force and injury, this is true with the snaffle or any other bit or even a hackamore. It is for this reason that there are restrictions on exactly which bits can be used e.g. length of shank, size of port etc. and there is close scrutiny of the horse at the end of any test. Any indication of injury to the horse results in elimination. This is a powerful incentive to ensure riders are judicious in their use of the reins.

The anatomy of the horse determines the effect of the bit(s) on the horse and the snaffle and curb bit function in different ways. The snaffle produces the flexion and exercises the muscles whereas the double bridle produces the bending of the haunches. It allows the shoulders to be framed to improve self-carriage and posture. This leads to a better balance of the horse and suppleness in exercises which require a high degree of collection. The double bridle enables the rider to improve the precision of his aids and to establish a refined communication with his horse. It literally 'lies in the hand' of the rider as the mobility and dexterity of the hands are the result of a correct seat and fine feeling. This evidences a high level of skill and training and why it is required at top level of competition. Proper use of the double bridle demonstrates the ultimate in expertise.

Similarly spurs give the rider the opportunity to give subtle and refined leg aids. And again, there are currently significant welfare measures in place; specifications regarding the type of spur e.g. length of branch, type of rowel etc., inspections after each test and the penalty for misuse is punished by elimination.

Therefore, we believe that neither the double bridle nor spurs represent a welfare risk to horses and there exist sufficient controls to ensure against their misuse.

To make these two pieces of equipment optional would have no positive impact on horse welfare.

While it might be tempting to make these items optional as a 'peace offering' to critics in the hope that they will be satisfied that approach is incorrect and naive. But more importantly giving in to unwarranted or ignorant criticism is practically and ethically wrong. To institute a rule under the guise of horse welfare which has no positive impact on horse welfare would be disingenuous and cynical. It would reduce the FEI's credibility as an organization guided by principles and evidence. Simply stated it would be an irrational decision. Further as with most compromises of principles, it would have negative long-term effects as it would endorse the unjustified criticism which would encourage even more unjustified attacks.

While it may be uncomfortable to endure unfounded attacks, the only real defence is to adhere to the principle of using objective scientific evidence to establish rules regarding welfare. This is the only way the FEI can maintain its integrity and demonstrate good corporate governance. Further we urge that when considering welfare measures the options are evaluated in the context of the all the FEI disciplines. To suggest that one discipline needs to be more controlled in regard to welfare than another is misleading and false.

Thank you for your attention to this matter. If you would like further information regarding bits and spurs, design, function and effect on horses and evidence of misuse we are happy to provide more detailed information.