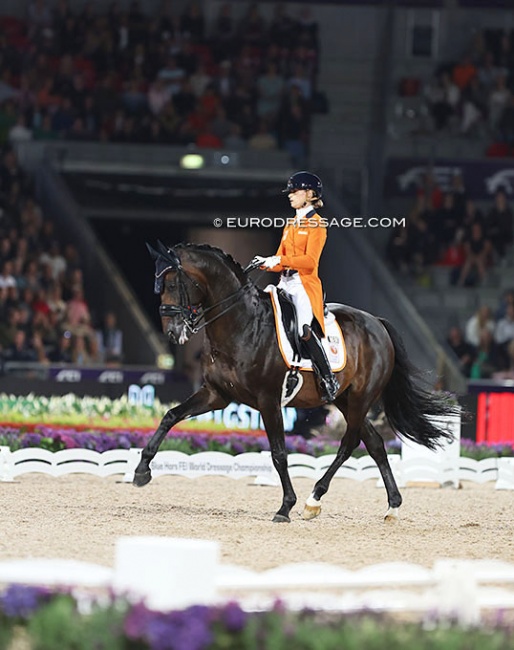 Dutch Dinja van Liere will not be taking her World Championship bronze medal winner Hermes to the 2022 CDI Stockholm, but her second ride Hartsuijker.

At the 2022 CDI-W Lyon World Cup qualifier on 29 October 2022, the KWPN licensed stallion Hermes (by Easy Game x Flemmingh) was withdrawn from the Grand Prix when he turned up unlevel in the warm up.

Dutch team trainer Alex van Silfhout spoke of a hoof abscess and the stallion has not yet sufficiently recovered despite being entered for the CDI Stockholm show this weekend.

Two weeks after Lyon, Van Liere told Eurodressage that "he still gets some time off, but I'm back in his saddle."

Today van Liere announced that Hermes has been replaced by Hartsuijker for Stockholm.

"It's going incredibly well with Hermes. We are slowly building up the training, he feels incredibly fit," Dinja wrote. "Stockholm was in the planning this week for Hermes, but of course we are super careful with him and we've been taking our time so that we are sure nothing is bothering him. In addition we don't think it's smart for him to make the long journey."

Instead Van Liere has trailered her second Grand Prix horse Hartsuijker to Sweden for the competition this weekend.

Van Liere and Hartsuijker were sixth in the World Cup qualifier in Stuttgart on 10 - 13 November 2022.

Hartsuijker is a 10-year old KWPN gelding by Johnson x Scandic), which owner Jan Pieter Dalsem bought at the KWPN Select Sale for 38,000 euro when the horse was 3. He has been trained to Grand Prix level by Van Liere.