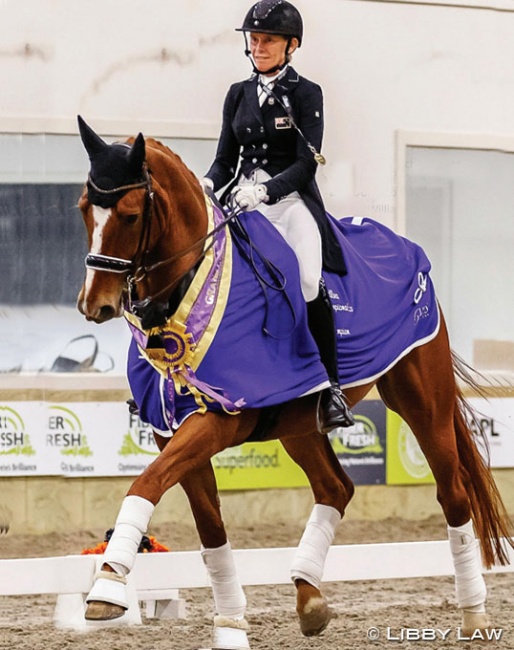 The mother and daughter combination of Wendi and Becki Williamson took out the two top titles at the 2022 New Zealand Dressage Championships in Taupo (NZL) on 23-26 November 2022.

The 2022 New Zealand Nationals were originally scheduled to take place on 24-26 March 2022 but were cancelled due to ongoing concerns around the current Covid situation throughout New Zealand. The March edition got postponed to November. The next nationals, those of 2023, are due in March again.

"He's still pretty green but felt like he stepped up a level," said Williamson, who has been competing Don Vito MH in his second season at Grand Prix level.

With no less than 10 combinations entered in the Grand Prix, the 2022 Nationals had one of the largest big tour fields ever. Nine moved on to the freestyle final on Saturday.

Wendi won the national title in 2017 on Dejavu MH, who sadly passed away in 2018. She has been working with Coralie Williams and Christine Weal lately as her eyes on the ground.  Wendi runs Waitekauri farm where she has 15 horses in training out of the 25 stabled there.

Rebecca "Becki", who still qualifies as a young rider, has stepped up to Medium Tour with ease on Jovi MH (by Bonifatius x Weltmeyer) took home the rug for the Medium A/B Tour Freestyle and the National Medium Tour title.

The reserve title went to Nicki Sunley on Laila Dawn (by Limonit).

"There were some aspects that we were a bit rusty on," said 20-year old Becki, "but overall I was pretty pleased with how it went. He felt energetic and positive in his movements."

It was a proud day all round for Team Williamson with stable rider Madison Schollum taking the Small Tour title on Kinnordy Golda  and of  course for their long time breeder/ supporter, Judith Matthews from Matthews Hanoverians.

"It was incredibly rewarding and I'm so proud of how far we have come in our training, and to be able to pull that off in the arena," said Madi. "It was also my first title at a Nationals so that made it even better!"

Weir has been riding Del Rico for six years and loves to produce him to Grand Prix level. A full-time professional rider Ben is predominantly a show jumping competitor, but has an equal interest in dressage. He trains with Melissa Steed and Vanessa Way.