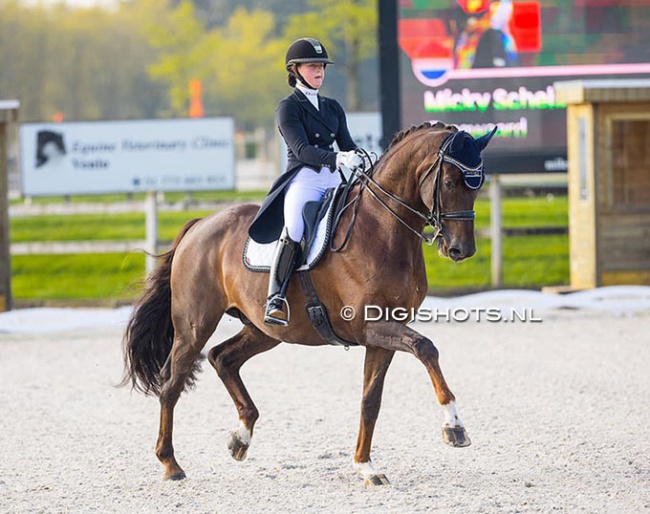 Dutch junior rider Micky Schelstraete no longer forms a combination with Gregwaard. The 12-year old has been sold to another Dutch youth rider.

Gregwaard is a 2011 born KWPN gelding by Florencio out of Wintana Waard (by Jazz x Flemmingh x Vincent),). He is bred by Luuk van Rijn.

Gregwaard captured the attention from the start. In the year he was born, he became the KWPN Foal Champion in Ermelo.

At the time of the Championship, two ownership shares were already sold by the breeder to horse dealer Nico Witte as well as Nol en Jeanette Gerritsen van De Dalhoeve. Later on Witte's part sold to the company of horse dealer Jonna Schelstraete, who is married to lawyer Luc Schelstraete.

The colt was expected to be a stallion prospect for KWPN licensing, but was not presented for approval.

In sport Gregwaard booked his first successes under Marlou de Ruyter. They were fourth in the 2015 VSN Trophy finals.

The pair tried to qualify him for the Dutch team for the 2016 and 2017 World Young Horse Championships but they never made the final cut.

In March 2021 a highly pregnant Marlou rode Gregwaard into their first and last Intermediaire II test.

In May 2021 the ride was allocated to Dutch junior rider Micky Schelstraete, who made her international show debut on him in August 2021 at the CDI Zandhoven. The pair further competed in Exloo and Aachen Indoor that year.

In 2022 Micky and Gregwaard showed at CDI's in Lier, Exloo, and Kronenberg, where they won two classes. They also finished fourth at the Dutch Junior Riders Championships, but her other horse Knight Rider was the number one choice for the Dutch team for the 2022 European Junior Championships.

Micky Schelstraete announced on Instagram the sale of Gregwaard to Chantal Verdonk.

"It was ‘love’ at first with for both of them," said Micky. "Of course I will miss this special boy really much, but I’m sure we will keep hearing from this new combination in the future."

The 17-year old Verdonk started on ponies and competed, for instance Nieuw Eldorado's Goldessa at novice level. Now she has four horses in her string: Illusion A (by Florencio x Tolando), My-Way (by Apache x Gribaldi), Inzaghi VDV (by Wynton x Lingh), and Nielson E (by Governor x Sir Sinclair), alongside a fifth one, Gregwaard.