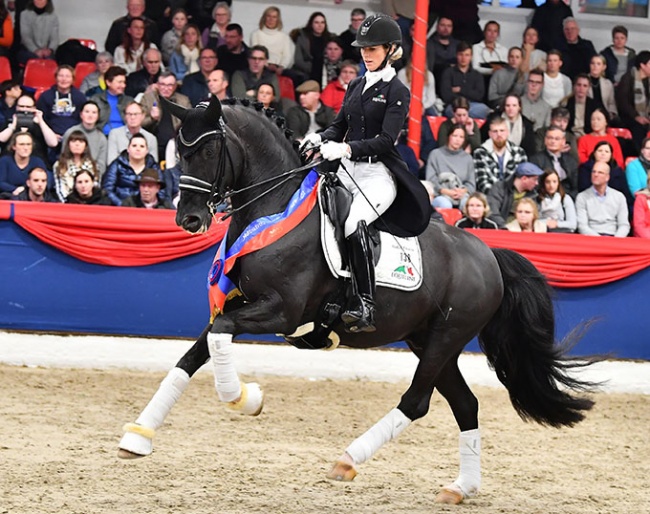 Lone Boegh Henriksen and Paul Schockemöhle's Total Hope OLD has been proclaimed VTV Oldenburg Stallion of the Year 2022 at the annual Oldenburg stallion licensing in Vechta on 14 January 2023.

Total Hope was celebrated for his own competition successes, including his start at the 2022 World Championships Dressage in Herning last summer, and winning bronze at the 2019 World Young Horse Championships, and the overall title in the 2019 Nurnberger Burgpokal and 2021 Louisdor Cup.

Total Hope OLD, born 2012, by Totilas out of Weihegold (by Don Schufro - Sandro Hit - Figaro) is bred by Christine Arns-Krogmann in Lohne.

“Of course, the hype surrounding Totilas had carried me away at the time. I was convinced that Weihegold and Totilas would complement each other fantastically. And the success of Total Hope confirms my instincts,” Christine Arns-Krogmann recalls.

As a weanling, the jet black stallion sold to Paul Schockemöhle and started his career with a bang.

Not in Germany but at the Swedish Warmblood licensing in Flyinge, Sweden, Total Hope OLD was able to convince the licensing committee and in the end excelled as champion stallion.

In his first season as a sire, the black horse was a much sought-after stallion in Sweden and won his performance test the following year. In 2017, the stallion won the Breeders Trophy for five-year-old dressage horses. As a six-year-old, Total Hope OLD qualified for the World Championships for young dressage horses and represented the Oldenburg colors in Ermelo with the Swedis Pernilla André Hokfelt. The pair won the small final and also placed in the final.

"I've always been a big Weihegold fan and had already bought Fürstin Weihe (by Furst Romancier). The first two offspring from this mare convinced me. Damon Gold OLD (by Damon Hill) became reserve champion at the 2017 saddle licensing in Vechta. He has a full sister Damiana, whose first foal from 2016, HP Grace (by Grey Flanell) became Ic mare from the Brillantring in Rastede 2019.

"With Total Hope I was able to acquire more Weihegold blood,” says Lone Boegh-Henriksen. "Total Hope may not be the tallest, but he has a heart of gold and a strength of will that is second to none."

Total Hope carries the valuable blood of Gribaldi on the sire's side via Totilas. On the dam's side there is the good pairing of Donnerhall x Sandro Hit, from which numerous Grand Prix stars have already emerged.

Total Hope's dam is none other than multi champion Weihegold OLD, bred by Inge Bastian, Bargteheide. She has shown what she is capable of from an early age, starting with the victory at the elite mare show in Rastede. Under Beatrice Buchwald, she won both the Nurenberg Burgpokal Final and the Louisdor Cup in Frankfurt, as did her son Total Hope OLD. In 2016, Weihegold OLD piaffed under Isabell Werth to individual silver and team gold at the Olympic Games in Rio de Janeiro, Brazil. In the years that followed, the pair won three consecutive World Cup finals.

With Weihegold as the dam, Total Hope OLD goes back to the famous Weissena mare family, which produced the licensed stallions Statesman OLD (by Stedinger), Inselfurst (by Inshallah AA), Canaster I and II (by Caprimond) as well as Triumphator and Top of Class (by Titus).