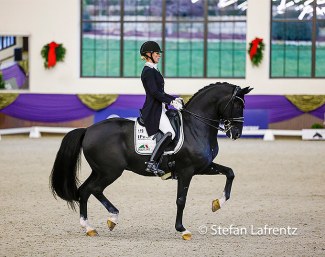 Six qualifiers were held throughout Germany the spring and summer season and the top two placed pairs of each qualifier were eligible to compete at the Finals in Frankfurt.

After winning the Nurnberger Burgpokal Finals for Developing Prix St Georges Horses and the bronze medal at the World Young Horse Championships in 2019, Freese and the now 9-year old Oldenburg licensed stallion Total Hope convincingly won the warm-up Intermediaire II with 75.419% and dominated the actual Finals, the classic Grand Prix test, posting a score of 77.540%.

The finals were judged by the German 5* panel including Elke Ebert, Ulrike Nivelle, Evi Eisenhardt, Katrina Wüst, and Henning Lehrmann and they unanimously placed Total Hope first. The marks ranged between 76.70% and 78.10%.

Total Hope is a clear merger and mirror reflection in conformation of his sire Totilas crossed with international Grand Prix mare Weihegold (by Don Schufro x Sandro Hit). He is bred by Christine Arns-Krogman and was acquired by Paul Schockemohle as a youngster. He spent his first years as a breeding stallion in Sweden. He was the most used dressage stallion in Sweden in 2015. He became the 2016 Swedish Warmblood Stallion Performance Test winner. Total Hope returned to Germany in the autumn of 2017. At the beginning of 2018 Danish stallion owner Lone Boegh Henriksen purchased the half ownership share from Schockemöhle. Swedish Pernilla Andre Hokfelt rode him to an 8th place at the 2018 World Young Horse Championships in Ermelo, after which the ride on the stallion went to Freese.

In 2021, Freese competed Total Hope in several S*** classes at five national competitions in Appelhulsen, Herzlake, Kronberg, Haftenkamp and Munich. Most recently she did the Test of Choice with him in Ankum before heading to Kronberg for the Louisdor Cup Finals.

"He has an incredible talent for everything, nothing is difficult to him," said Freese "I'm mega happy. We only rode the (classic) Grand Prix test once but it's still new to us. That he peaked here, worked for me, makes me speechless. The canter tour is truly exceptional. This weekend surpassed all my expectations."

The Norwegian Isabel Freese (née Bache) was thrilled with the result and is aiming to qualify Total Hope for the 2022 World Championships in Herning.

Valencia As and Valesco Are Two and Three

For former German team rider Fabienne Lutkemeier-Müller the trip to Paderborn paid off. Not only did she qualify two horses for the Louisdor Cup finals but she also arrived at the show with the favourite for the title, Valesco.

Aboard the 10-year old Westfalian mare Valencia As (by Vitalis x Hotline), Fabienne became the runner-up in the Finals with a score of 74.18%, after placing third in the warm-up round (Intermediaire II) with 73.279%.

Lutkemeier's Valesco (by Vitalis x Douceur) was considered the favourite for the title after his stellar performance in the classic CDI 4* Grand Prix tour at the 2021 CDIO Aachen in September, where he posted 74.174% in the Grand Prix and 77.638% in the Special. However, the liver chestnut did not find that same edge in Kronberg and finished fourth in the warm-up with 72.744% and third in the finals 73.38%.

"It feels like we are floating, it's so much fun to ride them," said Fabienne after her tests. "Valencia As has become more self-confident and I'm very proud of how we handled it. She's my prima ballerina. I tried to give Valesco some courage, but he was unusually distracted here. Today was better than yesterday,  as he was not fully relaxed then, but did well (in the second test). He was a bit scared. He felt more at easy in the Aachen arena."

Although Valesco was third placed in the Louisdor Cup finals, the German DOKR and Liselott Schindling stiftung considered him the best rising Grand Prix horse of the year in Germany and awarded him the 2021 Otto Lörke prize.  Mum Gina Capellmann-Lutkemeier bought Valesco as a 3-year old for 80,000 euro at the 2014 Westfalian Autumn Elite Auction in Munster-Handorf. At the same auction Valencia As sold for 200,000 to a Dutch client but it turned out to be a non-sale. Three months later the owner at the time privately offered the mare to Capellmann and they bought her.

Balkenhol's High Five, who was first competed by Janne Ahlmann and Nele Tetzlaff as a youngster, before Anabel began showing him as a 7-year old, proved consistency in Kronberg with two balanced rounds. He was fifth in the warm-up class with 72.233% and climbed one rung on the ladder to finish fourth in the Grand Prix finals with 72.62%

Wandres and the Taiwanese owned Hot Hit were third in the warm-up with 73.372% but in the final round finished fifth place with 72.44%.