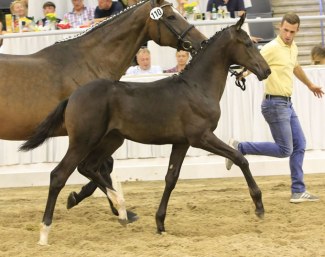 Bea Birmingham became the top selling foal at the 2018 Hanoverian Elite Foal and Broodmare auction in Verden, Germany, on 4 August 2018.

The second most expensive foal was colt Roache (by Revolution), bred by Sally Hjort Schultz in Denmark. He sold for 24,000 euro. Roache's sire Revolution became World Champion of the five-year-old dressage horses in Ermelo/NED on the same day. The brown colt descends from the dam line of Dallas, from which French Kiss, who became World Champion with Katrin Burger in 2004, also descends.

While 57 promising dressage talents were auctioned on Saturday, 37 foals and three broodmares with show jumping pedigrees were sold  the day before on Friday. The Balou du Rouet x Calido son Beck's Balou (breeder: Sabine Pedrina, Teolo/ITA, exhibitor: Jürgen-Heinrich Ohlhoff, Bergen) was the most expensive jumper foal. The perky bay, whose dam was successful in advanced level jumping, sold for 15,000 euro to breeders from Schleswig-Holstein.

"There were many names in the foals' pedigrees that have proven their performance in sport. A compliment to our breeders", auction manager Jörg-Wilhelm Wegener said.

The 94 auctioned foals achieved an average price of 8,233 euro.

Related Links
A Summer in Verden with Auctions, Shows and Championships
Friends for a Lifetime from Verden
A Day in the Life of a Verden Auction Horse