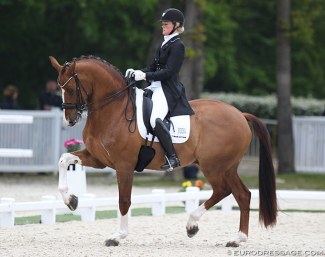 Japanese Masahiro Kosaka has taken over the ride on his Grand Prix horse Eddieni, which was previously competed by Swedish Malin Wahlkamp-Nilsson.

Kosaka aspires to qualify Eddieni for the 2020 Tokyo Olympic Games, although no firm decisions about a competition plan have been taken.

Initially the 63-year old Kosaka communted between Japan and Barcelona, Spain, but since June 2019 he has been living in Germany with regular trips back to Japan.

Kosaka purchased the 10-year old Dutch warmblood Eddieni (by Johnson x Negro) in 2017 and competed him at CDI's at small tour level in Spain in 2018, while being based near Barcelona, Spain.

This year the horse was trained to Grand Prix level by Malin Nilsson, who is the head rider at Patrik Kittel's yard in Germany. She competed the talented chestnut at CDI's in Nieuw en St. Joosland, Compiegne, Geesteren and Falsterbo and came very close to capturing a Swedish team spot for the 2019 European Championships in Rotterdam.

With the Tokyo Games approaching, Kosaka has now taken over the ride in an attempt for Olympic selection with Kittel heading the daily training.

Kosaka is contemplating to take Eddieni to Wellington, Florida, this winter, if they are ready as a combination.

"We are expecting to have clear picture by the end of 2019," Kosaka added.

Kittel will make his show debut on Eddieni this weekend at the CDI-W Fot 27-29 September 2019.

Kosaka has a third Grand Prix option in the wings. "I have another super horse for me to ride at Polo Club in Barcelona.  He is still young. However I am planning to take him to Wellington," he said.

Although semi-retired, Kosaka still spends time in his family's investment and real estate business in Japan.

Furthermore, Malin Nilsson today confirmed the rumour that she is pregnant with her first child, a girl, due in February 2020.