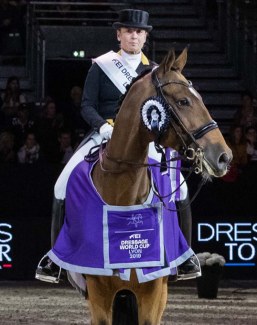 Germany’s Isabell Werth showed exactly why she is known as The Queen of international dressage when, on her debut in the 2019/2020 FEI Dressage World Cup™ Western European League at the second leg in Lyon, France on 1 November 2019, she produced yet another of her right-royal victories.

Partnering the 13-year-old gelding Emilio she was pinned into second place in yesterday’s Grand Prix won by Great Britain’s Charlotte Dujardin and her latest shining star, the 10-year-old mare Mount St John Freestyle. But today the German legend did what she does best and fought back to win the Lyon leg for the third consecutive year when putting a massive 87.090 on the board. Werth’s much higher degree of technical difficulty, compared to Dujardin’s kur, certainly worked to her advantage.

There was great anticipation of the clash between Werth, who has taken the series title a total of five times including the last three in succession, and Dujardin who was twice crowned champion with the great Valegro. It was at the 2014 Final in Lyon that the British rider first lifted the coveted FEI Dressage World Cup™ trophy, and fans are super-excited to see her back fighting for the supremacy she held in the sport during the heady years before Valegro’s retirement in December 2016. She’s aiming for a spot at the 2020 Final in Las Vegas, USA next April so made a great start to her points-campaign when collecting the maximum 20 today - as defending champion Werth doesn’t need to collect points, instead she is only obliged to compete twice with her horse of choice in order to qualify.

Werth is the ultimate competitor, already relishing the return of potentially her biggest rival over the coming season and beyond. She always says that competing against the best raises everybody’s game.

"Welcome back Charlotte! It’s good to have the best in the field, and that is also what the public like to see! It’s great to have Charlotte away from her island - now the World Cup season will be really exciting," said Werth, the lady who is herself a longtime legend, with more medals in her trophy cabinet than any other athlete in the history of equestrian sport.

When she came into the ring, fifth-last to go, she was chasing the leading score of 80.015 set by compatriot, Frederic Wandres, riding Duke of Britain. And the crowd were clapping even before she started. “It was a wonderful crowd, the stands were full and the atmosphere was great. This is the second time I rode this Freestyle with this music and I really like it. I’m really happy and proud of Emilio. When you ride the last line and the crowd starts to clap you know you are in a good position!” Werth said after putting that 87.090 up in lights, despite taking the time out during her test to signal, on three occasions, for her music level to be turned up.

She was still holding sway when, last to go, Dujardin came into the ring, aware that her mare was more tense today. “Yesterday at the prize-giving she was quite stressed and today when she saw so many people she thought we were doing another prizegiving. I felt her stressed and a little worried going into the arena but I’m very proud and happy with how she behaved. She lacks experience and I have to keep her with me, but this was super experience for the future and I think she will become hard to beat!”, she said after putting 83.925 on the board for runner-up spot.

Dujardin is already looking down the road to the series Final, and the experience her mare can pick up along the way. “I will go to Olympia (London, GBR) and this will again be a big show with a big crowd and a great atmosphere. Then I plan to go to Amsterdam and hopefully Las Vegas!” she pointed out.

Third-placed Wandres, who posted a mark of 80.015, was delighted with his result. “When I saw the rider-list here I thought it could be difficult to do well, but now being third behind the two Dressage Queens is fantastic! With Duke it is special as we learned together. It is now our second Grand Prix season and we keep progressing”, he said.

Today’s winning Freestyle score was just fractionally below a personal-best for Werth and Emilio as a combination, and the lady who is in the privileged position of having multiple top-rides including her two super-mares Weihegold and Bella Rose is delighted that the 2019/2020 Western European League is off to such an impressive start. “Herning (the first leg in Denmark) has already taken place and the level was already very high. It is not only Charlotte but lots of good riders taking part, so it will be interesting to see what will happen in Vegas”, said the rider on whose home ground in Stuttgart (GER) the third round of the 11-leg league will take place in two weeks’ time.