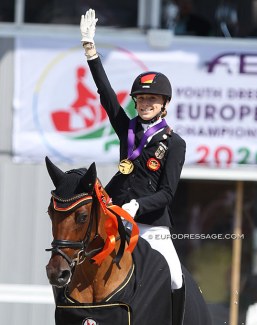 Germany's Lucie-Anouk Baumgürtel won the individual test gold medal at the 2020 European Pony Championships in Pilisjaszfalu, Hungary, on Saturday 29 August 2020 as the individual competition drew to a close with the second group of riders finishing the test.

Baumgürtel and her 9-year old Nasdaq (by Nemax x FS Don't Worry) were the overnight leaders of group one on Friday, after posting a World Record score of 82.351%.

This massive score went unchallenged on Saturday and Baumgürtel received a fifth individual gold medal in her career, after already winning previous double individual gold with pony Massimiliano at the 2016 and 2017 European Pony Championships in Vilhelmsborg and Kaposvar.

Three Germans were drawn to compete on Friday, with only Antonia Roth and Daily Pleasure left to ride on Saturday. The entire Danish team of four riders were drawn on Saturday and they were the only ones to breathe down the neck of the German armada.

Adriano B Back on the Podium

Sophie Boje Obel Jorgensen is the new rider of the 2019 European Pony Champion, Adriano B. The 14-year old Rhinelander bred gelding (by De Angelo x Flying Dream) has matured and developed in such an incredible way over the years.

The 14-year old pony is showing at his fifth Europeans with his fourth rider. He took Karoline Rohmann and Claudia Kjaer to their first Euro Pony championships, then Alexander Yde Helgstrand rode him in 2018 to double silver and in 2019 to double gold. Just two months later the pony sold to Jorgensen family.

Taking over a proven star has its pros and cons, but one thing is sure: it  is not an easy task. In a way, such decorated ponies are the perfect schoolmaster which can teach a young rider much the finesses of dressage riding, but to the public the rider is always the loser: s/he either won because of the name/experience of the pony, or if s/he does not win gets reprimanded for wasting talent (and money). It takes a strong personality to take on a proven pony, but Jorgensen certainly has succeeded at it.

The pair produced a strong individual test, but many highs and a few lapses. They began with a square halt, a clear medium trot and a nice shoulder in right, but the pony was uneven in the rhythm on the left volte and overall the trot looks a tiny bit hurried. The rein back was crooked, but the extended trots beautifully ridden. The right walk pirouette was big and there was little collected walk shown, but the extended walk was phenomenal with big strides. The canter work went fluently, even though in the counter canter left the pony loses the suppleness in the back (and the 3-beat rhythm becomes more 2-beat) and there was a hesitation in the simple change between V and K. Jorgensen also did not collect her pony much after the extended trot on the centerline and before the halt. Still her test looked incredibly smooth and the quality of Adriano's paces make him stand out in this international field. Overall, the elasticity with the right rein and contact with the right lead/bit needs to improve.

Jorgensen left the arena, knowing that a very good test was ridden. The score ended up being 79.000% for a silver medal, but the judges had her between 77.162% and 80.135%. The pendulum could easily have swung to the lower score if the judges were more strict on the small issues in the ride. They weren't and Jorgensen benefited from that, landing onto the silver step of the podium.

Roth Gets Bronze, Benner Misses out on the Freestyle

Germany's sole ride on Saturday came from Shona Benner on the 10-year old Der Kleine Sunnyboy (by Der Feine Lord x Valentino). The 16-year old is in her last year on ponies and after winning double bronze at the 2019 European Pony Championships, she was certainly aiming for more this year. With her coach Helen Langehanenberg on the sideline, all the necessary preparations were taken for a good performance. However this year, the quality of ponies and riding was much better than in 2019 and her excellent ride left her standing in 7th place as fourth German rider, not qualifying for the freestyle finals on Sunday as only three per nation are allowed to compete in the Kur.

Benner and Paul Schulz-Isenbeck's liver chestnut pony began with a halt that wasn't square and a small rhythm error in the first medium trot. The other extensions were well ridden and the traversal movements well executed. Also the walk pirouette left was small and Der Kleine Sunnyboy showed good relaxation in the extended walk. The canter work went smooth and Benner took much risk in the final canter extension. The test was a very good one, but the other ponies sparkled maybe a bit more. They finished with 75.919% which was a 7th place.

Rose Oatley ended in the "medalless" fourth place with 76.649% but gets a second chance for a podium place in the kur finals.

This duo was a double silver individual medal winner at the 2019 Pony Euros, but this year there is more heat from the competition. The combination did produce a wonderful ride, but maybe her pony's less flashy gaits limited her from scoring higher, even though the rideability, contact with the bit and elegance of the pair are supreme!

Nielsen and D'Artagnan rode a good halt at entry, ground covering extended trots, even though they are not the most springy, but they have good ground cover. The rein back were only small steps, but the collected walk was good and the extended had a very nice V-moment in the clear 4-beat rhythm. There was major loss of impulsion in the simple change at X when D'Artagnan relieved himself, but the extended canter that followed was beautiful. The pair was very consistent throughout the test with a pony that was obedient and attentive and, more importantly, soft in the bridle contact; a lightness and elasticity that podium place getter were unable to show.