Danish Warmblood Society Puts Foot Down: No Exceptions, Not Even for Big Stations 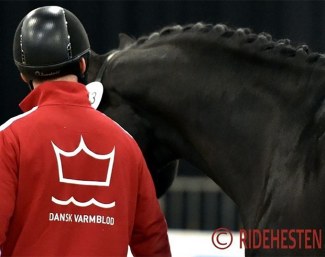 The Danish warmblood society has put its foot down and not caved in to the pressure stallion station Helgstrand has put on its domestic breed society, by requesting a special dispensation so their untested 3-year old stallions are allowed to breed.

Danish Warmblood holds a mandatory 10-day observation test in which the character and rideability of a newly licensed 3-year old stallion is tested before the colt is allowed to begin breeding.

The 2021 Danish stallion licensing was held in a special format this year at the beginning of March with home licensing, as movement of horses was restricted due to the EHV-1 outbreak. The 10-day test took place on 21 - 31 March 2021, as usual in Tørring.

Helgstrand Dressage announced on 22 March that it had decided not to send its 12 (!) newly accepted 3-year olds to the 10-day observation test, citing concerns for EHV-1.

"The outbreak of the Herpes virus has already hit Europe and incidents are also found in Denmark, so we do not dare to take the risk to move the horses to Tørring," said Andreas. "Even though the situation is under control in Denmark at the moment, we also need to think about our stakeholders. They have trust in us taking the right decisions at all and that we do everything to ensure the well-being and safety of the horse."

On 13 April 2021, Helgstrand sent out a personal email to Danish breeders offering special rates and conditions to breed to their untested 3-year olds nonetheless.

Helgstrand struck a deal with the German Oldenburg Verband, which will allow mare owners to use these stallions and will provide the proper paperwork to do so.

"We have worked on a solution for our breeders, who want to use our stallions. In collaboration with the Oldenburg Verband we can offer membership, mare inspection, registration of the foal, and issuance of a passport for the favourable price of 400 euro instead of the normal price of 680 euro," said the email, which was undersigned by Helgstrand's breeding manager Lene Birkmose.

The email continued, "Dansk Varmblod notified us that if the stallions pass the 35-day performance test in the autumn, breeders can also apply for  dispensation for the use of a stallion and registration of the foal in Dansk Varmblod."

Helgstrand re-iterates that, "we give the highest priority to the health of the horses at a time when all the uncertainty surrounding the herpes virus is so great."

In addition Helgstrand offers breeders who use their untested 3-year old stallion a 20% discount.

In the evening of 13 April Jan Pedersen, chair of Danish Warmblood, issued a press release, which was posted on Ridehesten.com.

Pedersen describes in detail the communication process that took place between Helgstrand Dressage and Dansk Varmblod and discloses the pressure this major business put on the studbook to make an exception for their station.

"Two days before the observation test I spoke with Esben Møller of Helgstrand, who said that in Germany they were considering cancelling the 14-day test before the breeding season due to the herpes outbreak," Pedersen wrote. "A final decision was to be made the following Monday. Esben Møller called Danish Warmblood asking us to also cancel our observation test, otherwise Helgstrand would boycott our test and stand their stallions at stud in Germany. Like that Danish breeders could have their offspring registered with a German breed society."

Pedersen added that before the observation test all stallion owners were contacted to asses if they should continue planning the test because of the unrest surrounding EHV-1. On 8 March Helgstrand sent a list of stallions (14 in total) they wanted to send in for inspection. The other stallion owners were also positive and wanted to have the test take place.

On 20 March veterinarian Mette Uldahl was consulted and she ensured that there were no health risks if the stallion stations were careful and complied with their own quarantine rules.

No Stallion Station Sets the Agenda for Danish Warmblood

"So, the question was whether we should cancel because Helgstrand wanted to boycott the test, because a door had opened in Germany," Pedersen stated. "The latter we could not live with."

Pedersen underlined that, "it is not sustainable that a stallion station, no matter how big it is, sets the agenda for Danish Warmblood."

Pedersen further mentioned that Helgstrand had been betting on two horses, as a figure of speech.

"Helgstrand encouraged us to wait with the start of 10-day test until Tuesday, when a final decision had been taken on the cancellation of the 14-day test in Germany," Pedersen added. "To us it sounds a bit hollow when Helgstrand writes in his post on their website, "we give highest priority to the horse's health." The risk of herpes infection was hardly higher on Monday than on Tuesday."

"Of course, a dispensation can be requested, but a dispensation for Helgstrand's entire collection of (3-yo) stallions would make a laughing stock of the stallion keepers who follow the rules of the game, which are all the others."

Danish warmblood did extend the hand to Helgstrand, showing they are willing to co-operate on equal terms.

Pedersen said, "Helgstrand has been offered to inspect their stallions for an extraordinary 10-day test that starts today (13 April). At Helgstrand they said they did not want to make use of this offer."

On 13 April a 10-day observation test started following the late licensing. Helgstrand's 3-year olds could have joined that one.

He reiterated, "in addition to the breeding aspect, this is also about the principle of who should set the agenda in Danish Warmblood."

In conclusion, Pedersen hopes that Danish warmblood breeders will stay loyal to the society:

"I would encourage and hope that you still support Danish Warmblood and choose a stallion, of which the offspring can be registered in Danish Warmblood. There are many opportunities for this - also among Helgstrand's stallions."