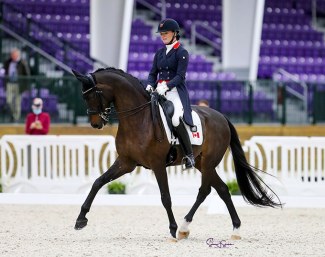 Highlights of the day included wins for Lindsay Kellock (CAN) and Sebastien in the Grand Prix CDI3* and Kevin Kohmann (GER) on Five Star in the Prix St. Georges CDI3*.

Kellock and Sebastien won the Grand Prix CDI3* with a score of 71.522%, their fifth grand prix-level victory together. They topped a field of 27 riders in total.

“It was probably one of my best tests yet, feeling-wise,” said Kellock following her win. “I think our passage was very good today. I think our piaffes have improved. We got really good one-time changes and a good trot half-pass. I think overall we were consistent throughout the ride today.”

Kellock and Sebastien showed throughout the winter and took a break before heading to World Equestrian Center – Ocala to try and achieve their final qualifying scores for the Canadian team to head to the Tokyo Olympic Games.

“We decided to give him a break and reassess what he needed and what I needed to do,” she said of the 15-year-old Rhinelander gelding by Sandro Hit x Fidermark owned by Enterprise Farm Equestrian LLC. “We worked with [trainer] Ashley [Holzer] and our team and made some changes. I felt really confident coming into this class, and I also knew that I really had to make a statement here for Canada and for our qualification. I’m really glad that we were able to do that today. He just gave it his all and was amazing.”

Thirty-year-old Kellock, who grew up riding with Olympian Jacquie Brooks in Canada, took a working student position at the age of 19 with four-time Olympian Ashley Holzer, who is also her godmother.

“[I was] thinking I was only going to be there for a year and then go back to school. You know how that goes!” she laughed. “I ended up managing and working for her for seven or so years. Now I’ve been on my own for three years and riding for Enterprise Farm and a couple of other people. I train every season with Ashley, and we train virtually as much as possible when I’m in New York. She’s my mentor, and my everything. She’s like family to me and a huge part of my career, so I’m grateful to her for that.”

Kellock and Sebastien will compete next in the Grand Prix Special CDI3* on Sunday.

She added, “I want to say a special thank you to Sebastien’s owner, Melissa Schiff. She’s been a huge supporter of mine, and she’s just been great to have as an owner. I’m excited for the future with the horse and with Melissa as an owner.”

Second place went to fellow countrywoman Brittany Fraser-Beaulieu and All In, a 16-year-old KWPN gelding by Tango x Damiro owned by Brittany Fraser and Marc Andre Beaulieu. They received a score of 70.848%.

Canada swept the podium with a third-place finish for Chris Von Martels on Eclips, a 12-year-old KWPN gelding by Apache x Olympic Ferro owned by Barbara Soederhuizen and Chris Von Martels, with a score of 70.826%.

“Brittany, Chris, Naima and Jill are all very good friends of mine,” said Kellock of her fellow Canadian riders. “It’s been so fun to be here competing with all of them. Especially at the end of a long season, to come here and do top three with the Canadians is really great. This facility is mind-blowing too.”

Kohmann and Five Star, an 11-year-old KWPN stallion by Amazing Star owned by Olga Hartsock's Equitas LLC, put in a wonderful test in their first trip down centerline at World Equestrian Center – Ocala, earning a score of 74.216% for the win. They received a high score of 76.176% from judge at C, William Warren.

Kohmann, who has been riding Five Star for two years, brought the talented horse along from Fourth Level after meeting the horse’s owner, Olga Hartsock, by chance and taking an interest in the special stallion.

"I asked if she needed some help and she said yes,” recalled Kohmann. “That’s how it happened. A few days later, she bought him over with a leadline and put him in a stall in my barn, and that’s where he stayed.”

Kohmann describes Five Star as “extremely consistent and extremely smart.” He added, “I taught him the one-tempis in two days. It’s fun to work with a partner like that. He has not let me down a single time so far. He’s always with me.”

The pair will continue in the Intermediate-1 and I-1 Freestyle classes this weekend before moving up to the grand prix level later this year.

“Right now, we’re schooling all the grand prix movements at home,” noted Kohmann, who is also riding in his last competition as a German citizen, having gained his U.S. citizenship this year. “We wanted to finish the season at Small Tour to promote him nicely since he’s now breeding a lot. That’s really exciting. It was more important for us to have one season where we get out there, create a name for ourselves, and now we’re ready to start with the grand prix.”

Kohmann said that World Equestrian Center – Ocala is “the best facility I’ve seen in my life. Anybody I’ve spoken to says the same thing. I’m walking around here, and I find new things anywhere I go. Starting with how they manage the manure here, the Big Ass fans, the A/C, the walkways, the footing, the trailer parking; it doesn’t stop. Everything is amazing.”

Along with Five Star’s win, his owner Olga Hartsock, was victorious in the Prix St. Georges – Amateur class on Jinta, owned by Equitas LLC. They scored 65.049% to win the class.

Second and third place in the Prix St. Georges went to Ashley Holzer (USA). On Bliss, a nine-year-old Oldenburg mare (by Bordeaux x Likoto) she owns with Dr. Diane Fellows, Holzer placed second with 72.500%. She was third with a score of 70.637% on Hansel, an eight-year-old KWPN stallion by Don Olymbrio x Metall owned by P.J. Rizvi.

Holzer echoed Kohmann’s sentiments about competing at the new venue. “It’s an incredible facility and a huge addition to equestrian sport in America,” she expressed. “It’s top-notch, from the indoor arenas, to the outdoor rings, to the stalls that are huge with fans and the beautiful StableComfort flooring. They’ve really done every detail. It’s just exceptional. I’m really, really impressed.”

Holzer was “thrilled” with both of her horses in the Prix St. Georges, since neither has much international experience; it was only Bliss’s third international class and it was the first for Hansel.

“[Bliss] is one of those horses that internalizes tension,” said Holzer, who sourced the horse at Hof Kasselmann in Germany. “Today she felt just amazing in this ring. I was in one trot extension and just thought, ‘Oh what the heck, let’s go for it.’ It’s so great to feel a horse relax a little in the ring, and you can start to see its potential. That was pretty exciting.”

While Rizvi is Hansel’s usual rider, Holzer wanted to capitalize on the opportunity to give the young horse experience at a new venue. “He was incredibly tight when we got here on Wednesday, but he was all business in the ring today,” she said. “I was even able to let the reins go a little at the walk, which I wasn’t sure I could do. I think both horses really went in that ring and gave it their all, and that’s always such a nice thing to feel as a rider.”