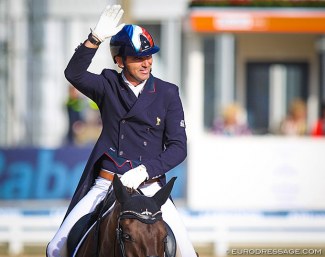 French team dressage rider Arnaud Serre fractured his arm in a riding accident on Monday 26 April 2021. The injury jeopardizes his dream of getting selected to the French Olympic Team for Tokyo.

"While he was galloping, his horse stumbled and fell, throwing his rider off in his fall," Arnaud's wife Anne-Sophie Serre told Eurodressage.  Anne-Sophie was on her way back from competing at the 2021 CDI Hagen in Germany on the weekend.

"Fortunately, the horse was not injured, but Arnaud fractured his humerus. When I was notified of the accident, I was in Germany. So I came back in a hurry."

France is eligible to send a team of three riders to the Olympic Games in Tokyo. Only three riders will be selected and one travelling reserve.

"There is never a good time for these things, but we have to admit that it is a real blow for us," Serre confessed. "With six weeks of immobilization it seems difficult to consider participating in the next Olympic Games."

We are both very sad about it but we have to be happy that this fall did not have more serious consequences," Anne-Sophie added.  "We are together and in spite of the immense disappointment it is the main thing."