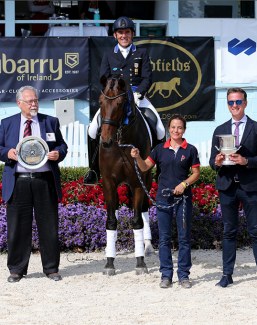 Olympian Cesar Parra was proclaimed “Best FEI Rider” of the 2021 CDI-W Devon after winning in the CDI 3* Small Tour. Also, him and his assistant trainer took home the Championship and Reserve Championship in the Young Horse Divisions.

Dr. Parra has a close affinity with Dressage at Devon. He first competed at the venue in 2000 and has been back every year since, racking up 34 victories and achieving the coveted FEI High Score award six times on six different horses.

Cesar says he keeps returning because of the high level of competition, the quality of the judging, the atmosphere, and, more recently, the excellent footing. The 2004 Olympian compares the event to dressage shows in Europe.

“Other U.S venues are much quieter because the stands do not fill up. There is little applause and audience involvement,” said Parra. “People here are even actively engaged in watching the rides in the warm-up rings. It’s a very different ambience and the atmosphere is more electric and fun. Lots of volunteers and renown officials work incredibly hard to run an amazing show.”

This year, Parra brought five horses to the show, including Brooke Centrella’s 12-year old Westfalian mare Belle Ami (by Belissimo M x Ribbeck), which Cesar imported into the U.S.A as a young horse. She was first shown successfully by Finish Merita Hagren and other members of Parra’s team, after which Centrella took the ride in 2018 and 2019. Recently, Centrella and Parra made the decision to take the mare to Grand Prix, and Parra took the ride last month, with Devon being the international debut for the pair.

Belle Ami and Parra turned in winning performances in both the Intermediaire I and the Intermediaire I Freestyle, with both the FEI High Score and the Best FEI Ridder awards. “Belle Ami is really fun. She’s willing, comfortable, easy and level-headed. She is spectacular. It’s like riding on a cloud,” Parra explained.

"Belle is a tremendously talented horse that we’ve had the pleasure to train since she was a baby. She is not a stranger to success in the big stage as she has won multiple classes here at Devon, first as a young horse and then in the Amateur small tour with her owner Brooke Centrella. Now I am very fortunate to be able to compete with such an amazing horse as my partner.”

“I was a little nervous because Belle and I did not have a lot of show preparation coming into Devon. However, she is such an easy-going horse and settled in very quickly. The first day was a little bit of a feel out day for us, but by the second day she was just ready to go and I knew we were having a great ride. Love her attitude."

Aboard Gina Raful’s 6-year old Fanta 4 (by Furstenball x Florencio I), Parra was a league of his own in the national 6-year old classes, winning both rounds with a significant point advantage to the second placed pair. Fanta scored 83.00 in the first test and 77.80 in the second, both plenty to win the blue ribbon and trophy.  Earlier last month, Parra and Fanta finished fifth at the 2021 U.S. Young Horse Championships.

“I couldn’t be prouder of our horses this year at Dressage at Devon," he said. "This is always a very overwhelming atmosphere and it is always difficult, especially with the babies, but we had many great rides here this year!”

While Devon is not only one of the most exciting dressage shows to compete at in the U.S.A., it also treats its participants well with plenty of additional gifts and awards to honour their participants and recognize their sponsors.

Cesar continues to source high quality young dressage horses in Europe, which he develops up the levels and offers for sale.

“It is very rewarding to see students progress through the levels and achieve their goals," he explained. "After winning in Chicago earlier this summer, Katryna did a great job again with our babies. Also, we had Dr. Lori Washton ride her first international Prix Saint Georges this weekend in the Amateur CDI. I' so happy for them.”

Cesar continues to coach students and clients as well as give clinics across the country and continents. As the Head Master of Training for the Colombian Cavalry, Parra contributes to the education regarding the welfare of the horse in his homeland Colombia, where he gives masterclasses  up to five times a year.

"Although I love riding in the arena myself, I get equal pleasure from seeing my students thrive in the show ring," Parra explained. "I have been teaching more and love to instil my passion for dressage into new riders. It's an extra facet of the sport that gives me great joy."