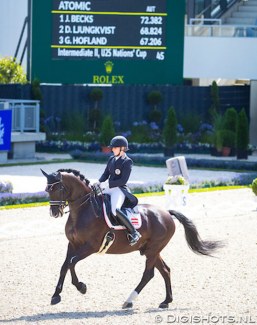 Franziska Fries' Atomic, the horse that took her from Under 25 into the senior Grand Prix division, has become the U25 schoolmaster for Austrian young rider Florian Artner.

Atomic is a 16-year old KWPN gelding by Florencio out of Uvolie CC (by Farrington x Damiro B). He is bred by the duo S. Tucker Bourdin (FRA) and Tracy Vosloo (GBR) and he was originally named Atticus.

Atomic made his international show debut in 2015 under Sascha Schulz and owned by a Luxembourg group of investors.

He first competed in the Intermediaire II at the 2015 CDI Cappeln. A year later he did his first international Grand Prix test at the 2016 CDI Mannheim and went on to show in Lipica, Brno, Cappeln and Biarritz.

In the winter of 2016-2017 Atomic sold to Austrian Franziska Fries, who at the time was competing Alassio's Boy in the senior small tour but was searching for a horse to take her into the Grand Prix ranks.

As of 2019, Fries is a senior rider and competing in the classic Grand Prix tour with starts in Ebreichsdorf, Lipica, Achleiten, Brnon Fot, and Salzburg. Their last international was in Hagen in the CDI tour during the European Champonships, where they won the Kur to Music. They finished the year with bronze at the 2021 Austrian Grand Prix Championships.

Atomic has now moved on as a U25 schoolmaster for 22-year old Austrian Florian Artner, who already rode his first U25 Grand Prix tests on 16-year old Dutch gelding Briar Junior (by Briar x Julio Mariner xx) this year.

Fries, who continues her career aboard Austrian Olympic ride Te Quiero SF (by Totilas), will continue to see Atomic on a regular basis as both she and Florian train with Christian Schumach.

Franziska announced the new rider of her horse Atomic on Instagram. "It's time now to let go of the reins. Thommy will continue to dance through the arena with Florian Artner. I wish him a lot of fun and success. I will continue to own him and already look forward to see him back cantering in my fields."