Everything is Possible Retired from Sport, to be a Broodmare 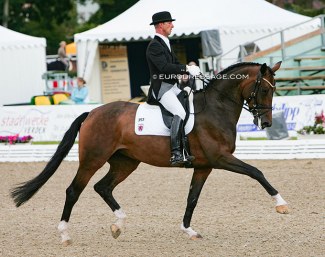 Machteld Hoeflake has decided to retire her 20-year old mare Everything is Possible from sport. The Westfalian mare competed internationally under Hoeflake, Marlies van Baalen and Sascha Schulz.

Everything is Possible is a 2001 born Westfalian mare by Ehrentanz out of Florence (by Florestan x Feuerfunke xx x Renaldo). She is bred by Gerda Schulz-Zumloh.

The bay mare was first competed in Germany as a 4-year old by Hiltrud Kemmer in 2005. The Luxembourg rider Sascha Schulz took over in the autumn of 2005.

In July 2006 she won the 5-year old preliminary test at the CDI Vierzon in France and a month later competed at the 2006 World Young Horse Championships in Verden, where she placed fourth in the consolation finals with 7.68 points. They also finished 25th in the second round of the Bundeschampionate in Warendorf.

A year later at the 2007 World Championships, they were 9th in the consolation Finals for 6-year olds with 7.58 points.

In 2008 she reached small tour level, showed at the CDI Strassen and Saumur that year and kept her at that level with numerous national and a few international starts (Biarritz, Vidauban, Vierzon) until their last show together in August 2010 in Leudelange.

She was owned by Isabelle Frank at that time.

The Netherlands: Van Baalen and Hoeflake

In 2011, Everything Is Possible moved to the Netherlands and became listed as owned by Dressage Stable van Baalen.

Marlies van Baalen and Everything is Possible were 8th in the 2011 Dutch Small Tour Championships. In 2011 they made their international show debut in Stadl Paura, followed by Hickstead. In 2012 they competed at the CDI-W Wroclaw and CDI Odense in Denmark, their last international together.

Everything is Possible sold to Van Baalen's student Machteld Hoeflake as her Under 25 ride in 2013. The new combination made its international show debut at the 2014 CDI Nieuw en St. Joosland in the U25 classes.

A year later Hoeflake returned to the CDI Ring in Deauville, followed by Malmo, Biarritz and Lier in November 2015, their last international together.

Hoeflake continued to compete the mare at national level and rode the 20-year old mare in her final show last weekend in Delft, The Netherlands.

Hoeflake shared on Facebook that "together with my parents I hope that "Eva" wil have a foal next year. It was a hard decision because she's such a fun mare to ride and handle, but I believe it's the right moment to thank her in this way: to retire her fit and healthy."