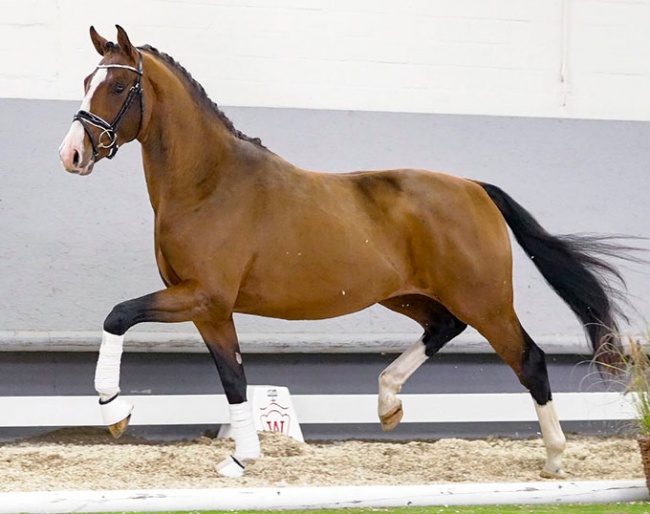 Zirocco (by Zoom x Furstenball became the top selling colt in the 2021 Westfalian Advent Online Auction, which offered 38 stallions and geldings born in 2019 for sale.

Bred and owned by Heinrich Kampmeyer, Zirocco achieved the highest knockdown price of all colts, 45,000 euro. He sold to German young rider Lily Martinez, who trains with Christian Flamm.

First Edition (by Franziskus x Ehrenpreis), bred and owned by Hubertus Hummelt, was the second most expensive colt, selling for 30,500 euro.

Salitos (by Sir Heinrich x Don Juan de Hus) fetched 30,000 euro and will also stay in Germany. He is bred by August Frerick.

D'Antino B (by Danone x Vivaldi) sold for 28,000 euro. The majority of the horses will stay in Germany.

Of those moving abroad, the most expensive was Facility (by Franziskus x Rock Forever) who found a new home in the U.K. for 22,500 euro. He will be joined by Deralino (by Dreamline x Blickfang) for 12,500 euro.

Interestingly not just Westfalian horses are offered for sale in the online auctions organized by the Westfalian verband. Also other breeds are included in the line up, for instance the KWPN bred and registered colt Oliver Twist (by Feinrich x United), who was born in the Netherlands and offered for sale through the German company of Dutch Caroline Burema. He sold back to Holland for 13,000 euro.