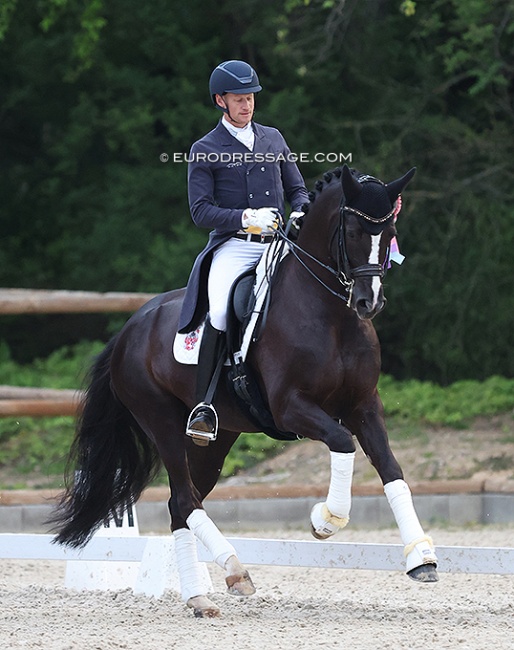 It has been my 2022 new year's resolution to personally cover a few new international dressage competitions instead of the usual high profile shows I go to like a homing pigeon. One of these new CDI's on the calendar and not such a far drive away from ED headquarters is the CDI Troisdorf, a stone's throw from the buzzing German city of Cologne.

CDI Troisdorf: By Riders, for Riders

Located at a newly revamped Haus Rott equestrian centre, the CDI Troisdorf presented a very nice, low-key intimate style competition. Shouldered by German amateur rider Lukas Blatzheim, the competition had only one show ring, a beautiful outdoor arena with green paddocks and trees surrounding it, and the warm-up indoors. Only the constant zooming of the busy motorway traffic behind the lorry park reminded the attendants of the nearby urbanization.

The crew at Troisdorf had big smiles on their faces and worked a long weekend with relentless enthusiasm. Their first international was hosted in 2021 and had around 50 riders. With their second edition this year they were already bursting at the seams: 120 show horses and a few more training one that came along,  were too much for the premises although the staff worked hard to accommodate everyone to their wishes. The balance for this show probably lies at 100 horses max.

This boutique CDI, not considered by some of the world's elite, provided an ideal platform for young Grand Prix horses to earn their mileage and ring experience. This must have been the train of thought for former German team rider Matthias Rath, who entered just one horse: Ann-Kathrin Linsenhoff's 9-year old licensed Oldenburg stallion Thiago GS, by Matthias' last team ride Totilas out of Ann-Kathrin's former international Grand Prix mare Wahajama (by Warkant).

The handsome Thiago's international career began in 2021 at small tour level with starts in Munich, Deauville, Crozet, Aachen and Randbol. At the beginning of 2022 they showed in the medium tour at the CDI Ornago in Italy, before making the leap to Grand Prix in Troisdorf.

The testosterone fuelled stallion has quite a presence in the arena with his gorgeous looks and three outstanding basic gaits. The 9-year old is still very green at Grand Prix and it showed in the test. In the Grand Prix he struggled with the piaffe, which either travelled too much forward or lost the rhythm. It kept the score at 70.565%, which was still enough for the victory. The judges (Vietor, Saleh, Holler, Stukelj, Danzberg) were not on the same level of what they saw. Slovakian judge Vietor had the pair at 68.913% and German judge Holler rewarded the ride with 73.152%.

In the Grand Prix Special on Saturday, however, Rath and Thiago weren't on the same communication level, which led to a string of mistakes and a ranking at the tail end of the class. The very experienced judges' panel for the Special (Vietor, Maurel, Stukelj, Holler, Saleh) struggled with this curveball.  Vietor, who probably assessed his Grand Prix test most accurately, must have been doing damage control or over-correction when he marked Rath's Special ride with 72.128% (1st place), while judge Holler gave the lowest score of 57.128% (15th). This  led to an incredible 15.00% (!!) point difference. The other three judges were at 63%. It is worth nothing that the break-down of scores was removed from the Equi-score.de website for this class (they were online before).

Bastings has only competed the bay gelding at three CDI's before Troisdorf, starting in 2020 at the CDI-W Brno and returning there in the Czech Republic in 2021 to claim the victory in the World Cup qualifying freestyle class. In 2022 they also showed in Kronenberg  with a 69.739% in the Grand Prix.

With the 2022 World Championships in Herning on the horizon, Luxembourg Grand Prix riders have been coming out this spring in full force.

German born Luxembourg rider Sascha Schulz presented the 10-year old Westfalian gelding Dayman (by Daily Deal x Flovino) in his second international show after a debut start in Achleiten in May 2021. Schulz claimed the ride on Dayman in the summer of 2020 and became National Grand Prix champion on him three months later. The horse was first competed by German Jurgen Höfler, before the Chinese owned company Lian United of entrepreneur Qiujuan He purchased the horse as a 2024 Olympic hopeful for Terhi Stegars, but then gave the horse to Schulz, who has moved from Ecuries des Pres in Leudelange (LUX) to Gestut Peterhof in Perl (GER).

In Troisdorf, Schulz and Dayman were third in the Grand Prix with 70.283% and second in the Special with 69.787%. The Westfalian is extremely gifted for piaffe and passage but in the tempi changes the rider struggled in the saddle.

Danish born Fie Skarsoe is also chasing a team spot for Herning with Manon Ackermann's 9-year old Lusitano stallion Imperados dos Cedros (by Rubi x Hostil). They made their CDI debut  in Sint-Truiden (BEL) in April, followed by Troisdorf, and clinched their two qualification scores. The pair was fourth in the Grand Prix (69.674%) and third in the Special with 68.489%.

A third Luxembourg Grand Prix rider was in Troisdorf making their mark: Mathis Goerens on the 10-year old Westfalian stallion Riptide (by Rock Forever x Show Star). After placing 7th in the consolation finals at the 2019 World Young Horse Championships, the pair made its national Grand Prix debut in 2021 and competed in the Louisdor Cup qualifier at the 2022 CDI Hagen. In Troisdorf they posted 66.326% for 8th place in the Grand Prix. The dark bay stallion is also talented for piaffe and passage, but throughout the test was flexed to the right, not yet showing the desired bending and elasticity on the left rein and overall straightness.

Text and Photos © Astrid Appels  - NO REPRODUCTION ALLOWED
Eurodressage was in Troisdorf on Thursday and Friday and photographed all riders competing those days. If you are interested in our photos, email us.