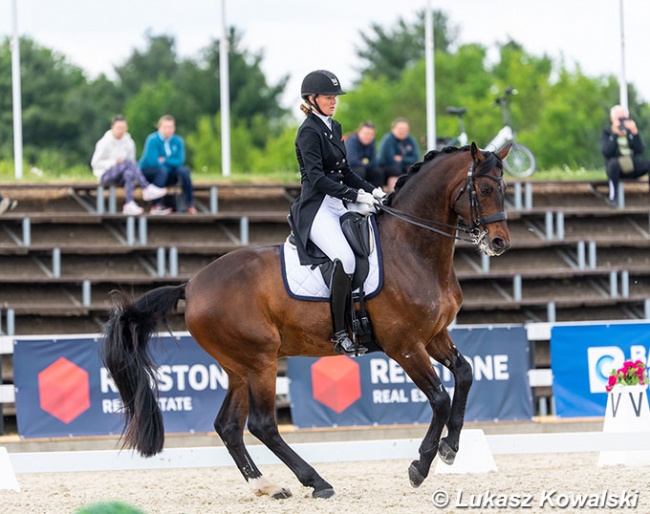 The inaugural edition of the CDI Olomouc was considered a great success with Moldovan Alisa Glinka winning the World Cup qualifier CDI-W and Australians Simone Pearce and Warwick McLean the 3* big tour classes.

The Equine Sport Center Olomouc is one of the most exclusive equestrian centres in the Czech Republic and boasts all-weather footing in all arenas and permanent boxes for the competition horses. The first ever CDI Olomouc was therefore highly interesting for central and Western European based riders to attend to score World Cup points and World Championships MER score.

After a second place with 67.605% in the Short Grand Prix behind Sandra Sysojeva, the 34-year old Glinka and Aachen topped the board in the freestyle with 74.355%.  The Lithuanian Sysojeva, who trains in Poland with Dominik Krasko, placed second on the 9-year old Rhinelander Jack Daniel's (by Charmeur x Rock Forever) with 73.740%.

Two German based Australian combinations reigned in the 3* tour. Less than two weeks a combination, Simone Pearce and Gestut Bonhomme's Fiderdance (by Fidertanz x Don Schufro) successfully won the Grand Prix with  69.761%. The pair has now achieved her first 69% score to be considered for Australian team selection for the World Championships Dressage in Herning in August.

Warwick McLean and the 13-year old Westfalian Hendrix (by Hotline x Donnerhall) were second in the Grand Prix with 68.457% and went on to win the Grand Prix Special on  69.298%. McLean is a long-time student of Danish Morten Thomsen.

After their international show debut in Achleiten two weeks before Olomouc, Gmoser and Foreman travelled to the Czech Republic to achieve a hattrick. The pair won the Prix St Georges with 72.206%, the Intermediaire with 71.971%, and the Intermediaire I freestyle with 74.942%.