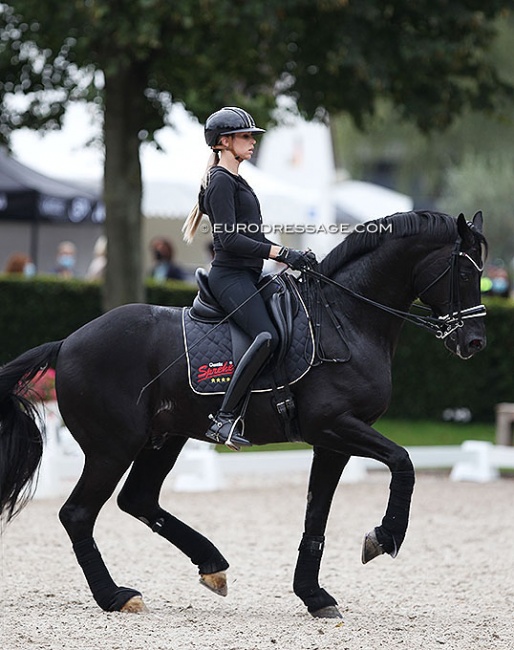 She is taking over the position of Lena Waldmann who decided to go independent.

Simone Pearce has been based in Europe for the last decade, starting as a working student at Johan Rockx' yard in Belgium before moving to Stable Perlee in The Netherlands. From 2015 till 2018 she rode sales horses for Helgstrand Dressage in Denmark before accepting a riding position at Gestut Sprehe in Germany.

From a competition perspective, Simone made her international debut as an Under 25 rider on Little Lion (by Leandro x Rastell) in 2013 and campaigned Wladimir OA (by Flemmingh x Florestan), Santiago (by Stedinger x Dacaprio), and Scolari between 2016 and 2019 at international Grand Prix level.

At the end of 2018 she left Helgstrand to ride in north Germany, but ended up being recruited to ride full-time for Gestüt Sprehe under the supervision of Sabine Rüben. Pearce's big break through in sport came aboard Gestut Sprehe's stallion Destano, who took her to the 2021 Tokyo Olympics

The Gutman family's Gestut Bonhomme is located in Werder near Berlin and one of Germany's most renowned stallion stations and training and breeding centers.

With Lena Waldmann as head rider, Bonhomme celebrated tremendous success in sport. She booked an incredible string of S-level victories on Bonhomme horses and rode Morricone in the 2019 Nurnberger burgpokal finals and 2021 Louisdor Cup finals. She also piloted stallion Grey Flanell intp the Louisdor Cup Finals and with Grand Prix horse Fiderdance she was a B-squad member.

After a thriving collaboration and at the peak of her career, Waldmann left Bonhomme in the early spring of 2022 to begocome independent with her life partner, show jumping rider Felix Hassmann.

Simone Pearce has now accepted the position of head rider at Gestut Bonhomme, which is going through a hard period after the unbearable loss of its owner and managing director, Rebecca Gutman, who passed away untimely on 14 May 2022.

"I have been really grateful for my time at Sprehe and thankful for all I’ve been able to do over the years, but I am now happy to go to a stable where I'll be the head rider and with the focus not on sales but on sport," Simone told Eurodressage. "Bonhomme has a really horse friendly, sportsminded and supportive mentality and at this point in my career I feel like it can be a a super match for myself and my goals going forward."

Pearce will make her show debut aboard Fiderdance this weekend at the CDI Olomouc in Czech Republic in pursuit of an Australian team selection score for the 2022 World Championships in Herning this summer.

"I want to live a big life and take risks in order to grow and develop into the best I can possibly be," Simone added. "Bonhomme is very success driven and open minded, plus they are open to me getting additional horses in training so it’s just a really interesting opportunity. I'm excited to see what the future brings, even though this is a very difficult period for Bonhomme and the dressage world as we are all mourning the loss of Mrs Gutman."

Saskia Conredel, press officer at Gestut Bonhomme, told Eurodressage that "we are very happy to have found someone who can fully carry on Rebecca's mission to her views. We welcome Simone to the team. She is known for allowing every horse to find its own way and has ridden our stallions a few times now. In these dark days, it is satisfying to see how well the horses feel under saddle with her."