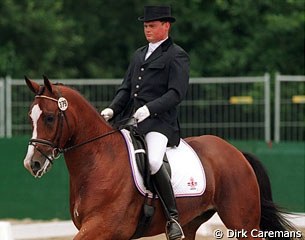 Dutch dressage rider Johan Rockx was the jack-in-the-box at the international dressage competition in Ksiaz, Poland.

Even though the trip to Poland took 25 hours trip, Kondor was fresh as a bird and scored 65,95% in his first test, the Intermediaire II. In the Grand Prix Rockx, who runs a dressage barn in Belgium with his wife Penny Zavitz, settled for a third spot with a 66,60% test. Kondor pushed up the score to the magical seventies in the freestyle. With 72,66% Rockx placed second again behind Menkova and immediately attracked international interest in his bay Aram gelding.