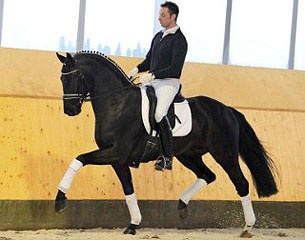 The 7-year old Hanoverian licensed breeding stallion St. Moritz Junior has been castrated. February, no longer up for stud. Owner Ethel Opländer decided on the castration for the best interest of the sport career of the horse.

Bred by Helmut Krentzel and owned by the Opländer family, the black St. Moriz Junior is by St. Moritz x Wie Weltmeyer x Prince Thatch xx. He descends from the first crop of foals by St. Moritz (by Sandro Hit x De Niro) and became a premium stallion at the 2009 Hanoverian Stallion Licensing in Verden.

St. Moritz Junior was the high scorer for dressage at the 2010 30-Day Stallion Performance Testing in Neustadt/Dosse, scoring 8.88 for trot and canter and 9.25 for walk to total 8.19 points.

The black stallion stood up for stud for two seasons at Gestut WM in Reessum, Germany, and was only very lightly competed. Eckhard Wahlers rode the stallion in riding horse tests and one A-level dressage horse test at four local shows between May and August 2011 and that is all the stallion has produced in the show ring so far.

At the end of 2011 the stallion moved in training with Ingrid Klimke but he left her yard in April 2012. 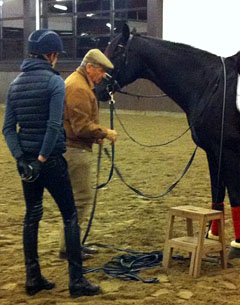 "Because the horse experienced back problems with a rider on top, we got in touch with Monty Roberts," Ethel Opländer told Eurodressage. "Moritz was flown to California in December 2012 and returned to us in October 2013. We picked up his dressage training from there. In order to be imported into the U.S., he had to cover naturally twice. This affected Moritz more than we expected. Because the rule says that stallions only up to 6 years olds can do the 70-day performance test and afterwards have to get their breeding certificate via sport, we decided to geld him. It was a hard decision," Ethel explained.

St. Moritz Junior is now being trained by Opländer together with Eicke von Veltheim. "For us the best interest of Moritz and all our horses is a top priority. Thanks to the help of Monty  and the castration, St. Moritz Junior can now have a worry-free life. Now his offspring will have to enchant the world," Ethel stated.