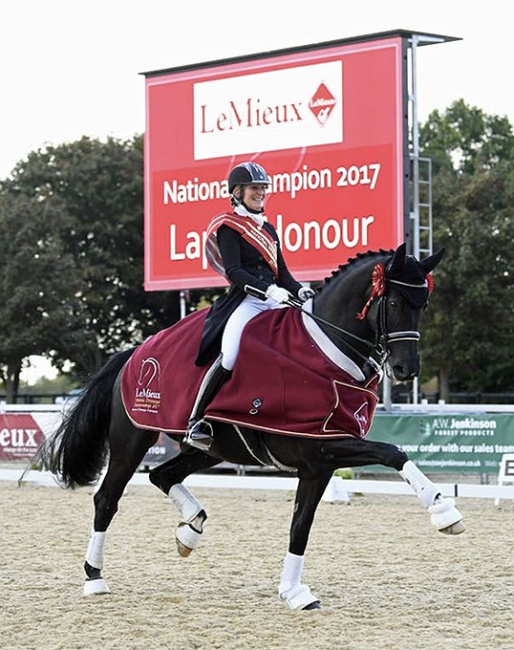 Aboard her 13-year-old Rubins Nite (by Rubin Royal), Hayley Watson-Greaves won her first ever National title after a confidently ridden freestyle test on Sunday, the last day of competition at the Nationals.

The pair in fact twice placed second, in the Grand Prix with 73.62%% and in the freestyle with 78.43%, but her average of 76.18% made her the overall winner in the pack and secured them the 2017 British Grand Prix Champion's title.

“I can’t quite believe it, I’m a little bit speechless," Hayley told Your Horse Magazine after the prize giving. “He’s just absolutely awesome and tries his heart out every time. I love him to pieces, we have a great partnership and he’s got me where I am today. I know my freestyle really well and I knew the pressure was on because it was so close with the competition, but I love riding him, I just went in there to enjoy it and have fun – which is what I always do with him.”

Hayley rode her current freestyle for the last time as she is preparing a new floorplan and music for the World Cup season ahead.

“I’ve got bits and pieces of my new floor plan as I’d like to make it a little bit more difficult for the World Cup competitions – although I’ve been told that it’s already quite challenging," she explained. "I’m hoping to run through my floor plan next week and then I’ll be getting Chris Lever, who does my music, to compose it in time for the end of October, hopefully.”