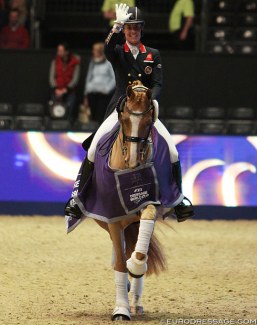 At the 2019 CDI-W London Olympia Horse Show a second version of a new Short Grand Prix test was test ridden and performance on 17 December 2019.

In recent years FEI Dressage Committee has been putting pressure on the sport by demanding change. They opine that it is a trickle down system coming from the International Olympic Committee which demands our sport to stay relevant, engaging and entertaining in this day and age if it wants to keep its Olympic status.

As dressage is a judging sport, its ground jury has received criticism, forever. It is not a novelty. Open an equestrian magazine from the 1940s and the complaints made then still echo now. However the past decade major changes have been made to improve the quality of judging, the transparency, as well as the fairness. Judges are held more accountable through peer pressure. While major improvement has been booked at the top echelon of the sport, the lower levels are still waiting to feel the effects.

The arrival of social media has added extra pressure on our sport with welfare issues being questioned and discussed world wide as well as keyboard crusadors and leymen rallying for hate campaigns targeting riders. No athlete is spared

Living in the Fast Line

Abraham Lincolm said, "I hope to stand firm enough to not go backward, and yet not go forward fast enough to wreck the country's cause."

The new short Grand Prix test has been a very sensitive issue for dressage aficionado's as the FEI and IOC are pushing for a more snazzy sport that has less to do with the foundation and core of the discipline, but appeals more to a modern day crowd that suffers from attention deficiency and a lack of deep rooted knowledge because of current day glorification of superficiality and banality on social media. One even dares to say that knowledge-shaming has becoming en vogue.

Change for the sake of change is never good and let's say 'don't fix what's not broken.' While the second version of the Short Grand Prix test was a huge improvement to the 2018 version, one left Olympia wondering: was it really necessary?

So what went down in Olympia with the Short Grand Prix version 2.0.?

Each rider came into the arena and rode their test after which they dismounted near the exit and were instantly interviewed by Imke Schellekens-Bartels in the arena while a camera filmed their reaction. The interview was shown on the jumbotron. It was interesting the rider's reaction of how the test went. Then the scores popped on the screen supported by an bombastic musical jingle while seeing the rider's face reacting to the marks. When the final score was posted the interviewer asked a second round of questions on the scores before s/he left the arena for the next pair to come in.

Midway through the test the second reaction was scratched from the programme as it began to take up too much time.

Are We Ice Skating?

The interview and waiting for scores reminded of ice skating, where you see the athletes sitting on a bench with a sponsor display behind them, waving to their fans and family at home.

The short interview with the rider is quite fun and could provide extra entertainment (as well as education) for the audience depending on what the rider is willing to share with the fans. This could be a nice future development for the sport, as one gets a closer feeling with the athlete and feel more personally connected to their experience.

It was sensible to drop the second round of questions (what do you think of your scores?) as it often prompted the riders to give a trivial statement.

Did it feel Shorter?

So did it all feel shorter as time constraint was the biggest argument to introduce a new test. Not at all ! With the added interviews, the time cut by the test was used for the entertainment factor. The audience that gathered in Olymia would happily have sat through the regular Grand Prix test.

The floorplan of the new test seemed to ride well. The tricky part is the short diagonal with extended walk, collected walk, turn and canter strike off on the centerline followed by the zig zag. This was the trickiest part of the ride but absolutely worth the insertion. It tested the throughness and relaxation of the horse.

Overall the scores were really high in Olympia for the Short Grand Prix test. The experienced panel of five 5* judges - Wust, Verbeek, Judet, Clarke, Gardner - were very willing to high score and give early Christmas presents to the stars of British dressage.

Several horses were more tense than normal because of the electric indoor atmosphere, with the crowds sitting within arm's length, virtually able to touch the rider's saddle pad. This tension in the many movements was not reflected in the scores. Instead of a lot of riders achieved personal best marks although better tests were ridden by them earlier in the season.

For instance, a star rider doing a collected walk that was more than 50% of the line lateral in rhythm (and visible to all judges), scored one 4, and the rest had it at 5.5 and 6. Or what about a halt at entry in which the horse is not immobile but takes a big step to the left during the salute?  Score: 7 to 8.5.

And this is still where the one and only issue of our sport lies: marking what one sees, unaffected by bias, halo effect, nationalism, personal connections, or economic interests.

How Did the Riders Receive the SGP version 2.0.?

Most riders commented after the test that it felt "quick" but this is an expected reaction as they are not yet used to the floorplan.

Dujardin, who won the class, joked it was "easy" but later added that "It was tricky as everything is off the right rein while the normal GP is of the left and there’s places that if you don’t get a good transition, the next movement is put at risk but it was good to ride."

Her trainer Carl Hester said: "It does happen very quickly, but it has all the right things in it. The rein back is back in. We don't need three extended trots. Visually it was much nicer to watch.

British team rider Gareth Hughes said in his instant interview: "it was tough, everything comes up so quickly."

Lara Butler said, "it's quite hard coming from doing the Grand Prix for so many years? When we turned the other way, my horse said 'what?'."

What did the Judges Think?

French 5* judge Isabelle Judet was the judge at C in Olympia told Eurodressage that, "I liked the proposed formula which assures a short and lively spectacle including interviews and immediate and emotional reactions from the rider. From a judge's perspective everything goes much faster which is definitely also the case for the riders. Overall the test is very concentrated while staying relatively fluent even when two or three movements strung together require a perfect mastery to be ridden with ease."

Judet added that "the comments of the judges and riders seem positive for this first try."

German 5* judge Katrina Wust designed the test together with trainer David Hunt and consultant Richard Davison amongst others.

"The idea of the short GP was to gain nearly 2 minutes of time but still keep it, firstly as fluent as possible for the horses, secondly as a general proof of suppleness and thirdly attractive for the audience, e.g. with the beauty of the long half passes. We kept all movements and most difficult transitions in (e.g. passage - extended walk) but shortened some lines and took trot extensions and one passage-piaffe tour out," Wüst explained.

Wüst stated that all judges agreed that it was easy to judge without ‘grey zones’ where there are difficulties to identify the main criteria of a movement.

"Most competitors managed the movements themselves very well," Katrina explained. "Surprisingly, some had problems with so called ‘easy’ transitions like from canter to trot at the end, which obviously is not as easy as people often believe. The majority received marks above 70% up to 81.55% for Charlotte Dujardin with Mount St. John Freestyle. Even riders with less gifted horses could compensate to a certain degree by riding very precisely and having their horses fully on the aids."

The Future of the Short Grand Prix Test

So what will the future of this new Short Grand Prix test be?

Will it be strictly used for the World Cup circuit, where it will serve as a warm-up test and qualifier for the kur. Or will it get a role at the Olympics were more riders could make it to the Games without lengthening the programme? Or it may shorten the total time of an Olympic class with a new test? Time will tell.

"We all were satisfied that the test was so well accepted. However, I had the feeling that this condensed GP is not less difficult than the normal GP and might be difficult for up-and-coming horses and/or less experienced riders," she stated. "It should therefore be kept for special situations, e.g. for high level shows with TV broadcasting or like in London Olympia, at prime time in a wonderful venue with an expert audience who get some additional entertainment when the riders where interviewed after their rides."

If you are interested in photos for your social media, send us an email