Trainining with Frömming: "Getting a Classically Schooled, Yet Incorruptible Eagle Eye of a Judge" 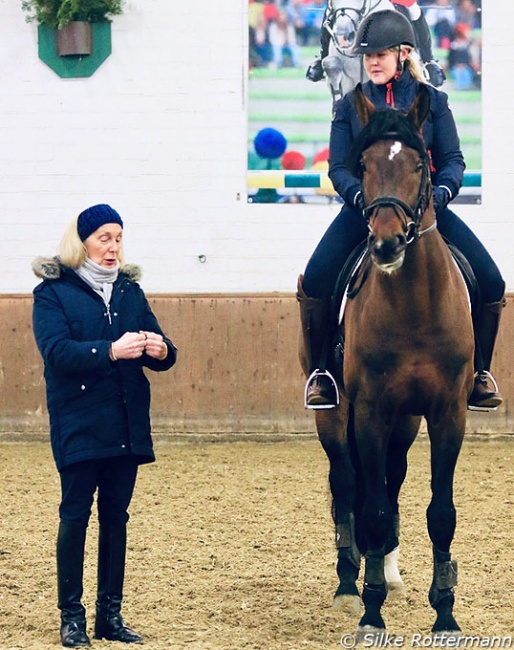 I have regularly trained with Col. Christian Carde in my own country and abroad from 2013 to 2018, so I am pretty well acquainted with French classical riding. When Carde decided to stop clinics abroad, I was very lucky to know to who to turn to continuing my classical riding education because as a riding instructor my focus is on finding solid tools working with every horse. And classical riding principles, may they be French or German, do exactly this job.

I’ve have had the opportunity before to ride in three weekend clinics on borrowed horses with former German I-judge Angelika Frömming the years before, but after the last clinic in September 2019 the wish became stronger to intensify training with her. Having lost both my horses in 2019, the problem seemed to get a four legged partner to realize my wish for getting to know more about classical German equitation. Thanks to the incredible kindness of Mr. Hannes Müller, head of the German Riding School since 1997, the opportunity arose to get two well trained horses of the School to ride for my training stay in Warendorf.

So January 2020 I flew out from Helsinki to Düsseldorf and took two trains to bring me to Germany’s equestrian capital near Münster.

In the morning Mrs. Frömming picked me up at the nice little B&B where I had already been staying earlier to take me to the German Riding School which is located in the middle of Warendorf, just next to the State Stud and both work closely together. The German Riding School is over 60 years old and since then has seen countless future riding instructors passing their written and ridden examinations on the well schooled school horses. They are stabled in the historic stables close to the big indoor arena that is attached to the administration building of the German Riding School.

Mr. Müller had chosen two horses for me to try out: A strong bright bay Westfalian gelding going back to the Florestan I-line and a much more refined looking Westfalian stallion by First Selection x Belissimo M. So we started the training week by getting to know the horses that we would be working with. These two are different in looks, but both were a real pleasure to work with as they are very well schooled and used to working with guest riders.

With every horse, but especially with a new horse you always want to start with the basics in order to find a good communication with them. On this first day the main goal was to get a feeling for the horses and have them relaxed and focused, in a good frame and balance. So we started with large serpentines and circles in trot. These help the horse to relax and creating and maintaining suppleness becomes easier. In trot there is no point to just trot around, because this makes the horse tired more easily, and it is better to make the work interesting and gymnastic for the horse. We checked that the horses were listening to the half halts and that it was possible to vary the trot between slightly collected and working trot. We used transitions between gaits and inside the gaits and some lateral work to get a good feeling on the first day.

Today we started riding on different curved lines and circles around the center line in combination with the exercises we did yesterday. This brought us to simple changes on a figure eight with two circles, having 3-5 walk steps between the canter circles. We worked on precision and preparation for the transitions by using shoulder in and shoulder fore to collect and straighten the horse. For good downward transitions it is important that the horse moves in balance, collecting with a light contact and the rider is softly using the driving aids until the very last moment of the transition. When this happens easily, the walk and canter that follows will be nice and easy.

After that we worked a little on flying changes and the collection of canter, testing different ways to introduce these exercises to the horse. We started with the 5 meter - loops along the centerline with simple changes of leg while crossing the centerline. Afterwards we included a flying change in between. Most important was the fact that the horse kept a good quality of the canter and clear suppleness. Afterwards we executed the flying change on the long and short diagonal, always at unexpected points, to keep the horse more quiet.

Both horses found it easy to collect and the variety of exercises gave me many ideas to use back home. We worked also on the turn on the haunches, combining shoulder in into preparation which makes it easier for the horse to do the movement correctly and remain soft yet active.

After two days of „warming up“ and getting to know my four legged teachers at least a bit, the third day would require more precision. My trainer is as precise as a Swiss watch anyway, but on top of that she used to be an international judge for more than three decades.

So on the third day we started to work more with precision, and exercises were done in a way as they would be presented on a competition arena. Because to prepare a horse well for competition means that this precision needs to be a daily routine as the horse needs to know what is expected of him. But routines are also most important for the rider. There should be a clear idea in the rider’s head what he wants to do and for which reason. This reason should not only be that a certain movement is required in a certain dressage class. All movements are developed to give gymnastics to the horse and to prepare the horse for the next task. The routines help to progressively improve the daily work and take good care of the basics. If something is failing, get back to basics, check straightness, let the horse relax a bit or get some activity in the movement, depending on the situation.

Today we continued with lateral work – shoulder in, travers and half-passes. For these it is beneficial to use 10 metres- circles for preparation. The bending that is created on the circle makes the start for the required movement easier for the horse. If there are difficulties, aim for a few good steps and prepare again. If you do less, but well, it will get easier soon.

Today we discussed about the function of the rider's seat and hand. A good independent hand is possible when the rider has a good seat in any situation. For this, good old regular lunging lessons would be very useful for any rider. The hand should think forward, and in German riding “give and take” is done by really giving with the rein up and forward along the horses mane for a few steps („überstreichen“). This is a good way to check and also correct the horse’s balance, frame and the self carriage of the horse.

The rider is allowed to play with the fingers by closing and relaxing the hand that holds the inside rein, and when the horse relaxes, the hands remain silent near the withers. Sometimes it is useful to give and retake just only the inside rain to be sure that the rider doesn’t block with the inside hand the inside hind leg of the horse. There is always dominating the idea of driving the horse with the inside leg onto the outside rein.

A good way to create a more relaxed rider’s hand is to think the little fingers slightly closer to each other with the thumb laying with a light, not cramped angle on the closed fist. This tiny movement helps the rider to relax the wrist joint and the arm more easily.

We continued on collection to prepare the horse for quarter and half-pirouettes, using a square figure from the track to the centre-line and back (2 corners on the track, 2 on center line). We first introduced the exercise for the horses in walk, then in canter. Shoulder- in was again part of the preparation, and the idea was to collect the horse only two or three steps or strides to an increasing degree before coming into the corner to turn. Collection for a pirouette in walk and the quarter of a canter pirouette should only be done for two well collected steps or strides at this point. We also continued to collect both horses on a circle, using variation between collected and working canter on a smaller circle by asking travers and on. larger circle shoulder- in.

On our last training day the horses started feel much more familiar already, and we kept practicing the variety of good exercises we had used during the week. It was a good moment to put everything together, discussing and getting the theory into practice with two different horses. This was an awesome opportunity to get practical training and deeper knowledge on good riding. The basics can always be improved, and it became clear again that the rider needs an endless interest for doing the basics correctly, but at the same time making it interesting for the horse. Only if the feeling is good, the movement can be really good and easy.

Training with Mrs. Frömming was a both an honour and a pleasure, as she has the skill to be extremely precise and insistent and at the same time keeps a very positive atmosphere on everything that is done. There has been more than just one moment when her strict voice dissolved in a loud laughter that gave some relief to the rider that she wouldn’t loose her sense of humour.

To have had the opportunity to train with somebody so classically schooled and with the incorruptible eagle eye of a judge, gives you the motivation to continue looking for the decisive details in equitation which can easily be overlooked in the quest for dressage movements, but which decide their quality.

As Warendorf now becomes more acquainted to me, I hope it was not my last visit to this charming little town that holds so much for riders and horse lovers alike.

Thank you Mrs. Frömming for your patience and pedagogy, thank you Hannes Müller for committing yourself to enable me this educational week and last not least thank you to the two fantastic and patient boys on four legs, „Keks“ and „Flashdance“.