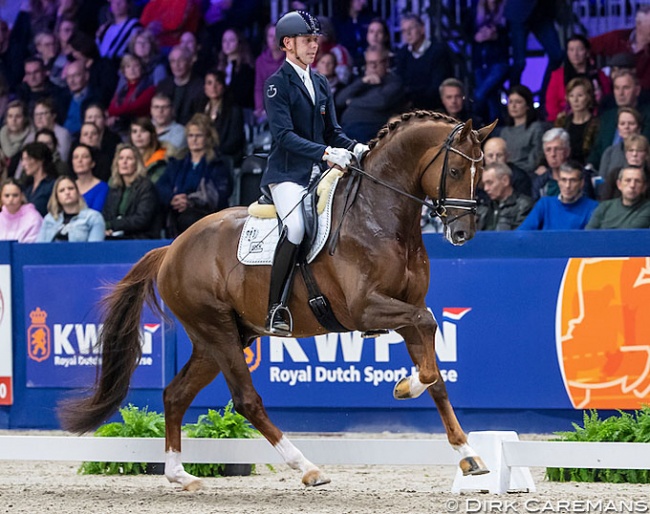 Three qualifiers were held in November and December 2019 for KWPN stallions which want to put themselves into the picture for the breeders. While initially the KWPN Stallion Competition was mandatory for young licensed stallions, now the KWPN licensing committee "recommends" participation.

In the L-level division for 2015 born stallions, Gaston Glock's King Karim bested the field. Under Hans Peter Minderhoud, the chestnut (by Toto Jr x Painted Black) scored a total of 93 points. Judges Monique Peutz and Bart Bax praised the colt for his body use, and easy way of moving. He got 9 for walk, 9.5 for trot and canter, 9 for harmony and 9.5 for general impression.

In the M-level division for 2014 born stallions, Marieke van der Putten steered Jacques and Saskia Lemmens' Jameson (by Zack x Negro) to victory with 94 points. The black stallion earned a 9.5 for his balanced trot and 10 for his expansive canter. His often short and tense walk earned 8.5 this time, but the harmony and general impression gave him to further 9.5 scores.

There were two runners-up with 90 points: Renate van Uytert on Just Wimphof (by De Niro x Riccione) and Dinja van Liere on Joop TC (by Ravel x Krack C).  Just Wimphof posted straight 9s on the board for all five aspects, while Joop TC shone in the trot, which got him 9.5.

In the Z-level division for 2013 born stallions, Bart Veeze and Imposantos (by Wynton x Krack C) achieve the high score of the day with 95 points. The compact black stallion got 10 for trot. This was Imposantos' third consecutive victory in three years of stallion competition finals.