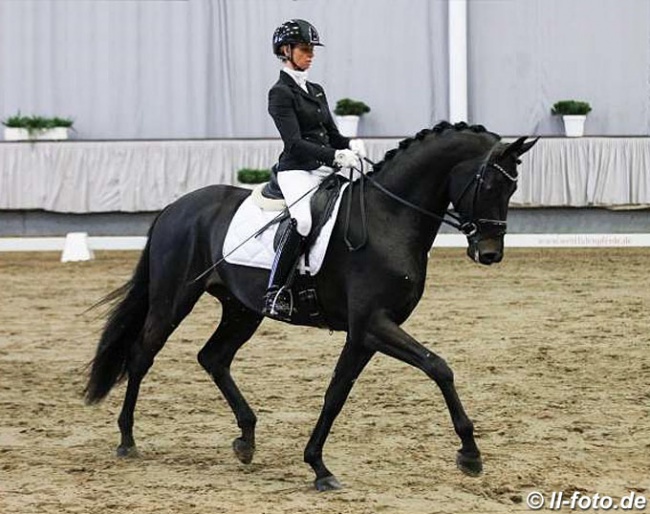 The Oldenburg stallions Fürst Dior and Gaitano became the high scoring stallions in the first sport test of 2020 held in Munster, Germany, on 2 - 4 February 2020.

The sport test could be followed online on live streaming, on which many interested breeders saw the Westfalian licensed stallion Maracana (by Millennium x Lord Loxley) have a total melt down in the arena, rendering his rider powerless with rearing and obstinate bucking out of nowhere. The horse, which was purchased by Gestut Bonhomme for 700,000 euro at the Westfalian auction, was eliminated from the testing. Clip My Horse removed the video of Maracana's test from its archive.

Twenty rising 4-year olds were originally entered for the sport test, but only eighteen actually did the three-day testing. Borghese MT (by Baccardi x Laureus) and Laudate Dominum (by Lord Leatherdale x Furst Fugger) were a no show.

Joop van Uytert's Fürst Dior (by Fürstenball x Sir Donnerhall) became the high scorer in his age group with 8.83 points. Presented by Eva Möller, the black stallion got 9.2 for walk, 8.4 for trot, 8.5 for canter, 9.1 for rideability and 8.8 for general impression. He is bred by Gerd and Hajo Hedemann.

Four 4-year olds Would Have Failed the Test

Four 4-year olds did not score more than 7.5 points. Last year this would have meant that almost half the group would have failed the testing and lose their licensed status, but as of 2020 the breeding department of the German equestrian federation decided that a low score has no consequences for the licensed status of a stallion

The German equestrian federation believes that this decision does not render the sport test concept obsolete, but puts the better performing stallions in a spotlight.

"Instead of constantly discussing necessary systemic changes because of the many drop outs and failing horses, eliminating the minimum score now gives each breeding association the opportunity to focus on and highlight those stallions with particularly good performance," said Klaus Miesner, Managing Director of the FN Breeding Department.

In the past the official minimum scores were 7.5 for Sport Tests, and14 day suitability tests (Veranlagungstest) and a minimum of 7.8 for 50 day tests (50-day HLP).

"In December it was decided by the majority of the member societies of the German Equestrian Federation that from 2020 on in Germany it is up to the individual decision of each German Sport Horse Society, if the studbook still requests in its breeding program a minimum score limit (which can individually set by the society by discipline and test format) or if the studbook requests a performance test ended with result," Miesner explained to Eurodressage. "Societies which have decided for the second (new) possibility are requested to set up an award (premium) system for those stallions which passed the performance test with an exceptionally good score. "

In the Munster sport test today, the KWPN bred First Lewis (by Ferguson) got 7.43 points, the Trakehner Instagram (by Schwarzgold) got 7.46, Robert Downey Junior (by Real Grandios) got 7.39, and Si Senor M (by Sir Heinrich) scored 7.44. Close to the edge, but above 7.5, were the Dutch bred Hey Henkie (by Hermes) with 7.55 points and Whatsapp MT (by Weltmeyer) with 7.58 points,

In the 5-year old group twenty were originally entered and 17 actually did the test. The testing of Maracana was stopped by the assessment committee, while the owners of Hulapalu (by Fairmont Hill)  pulled out the stallion themselves. Dante's Stern (by Dante Weltino), Escamillo (by Escolar) and Sansibar AK (by Sandro Hit) were a no show.

The highest score was achieved by Gaitano (by Goldberg x Rohdiamant) with an 8.32 total. The stallion got 8 for walk, 8.5 for trot, 8.3 for canter, and 8.4 for rideability and general impression.

The Swedish owned KWPN bred Kane (by Dream Boy x Krack C) scored the second highest mark of 8.25. This colt earned 7.4 for walk, 9 for trot, 7.4 for canter, 8.5 for rideability and 8.2 for general impression. Kane is Swedish warmblood approved but was rejected twice by the KWPN society. Two stallions scored a total of 8.12 points: Fontaine (by Finest x Samarant) and Zac Efron MT (by Zack x Don Larino).

Other "fairly low" scoring stallions were the Swedish owned Oldenburg licensing champion Benefit (by Belantis), who stranded at 7.78 points, Isterberg V (by Instertanz V) with 7.72 points, and Helen Langehanenberg's Tesla (by Vitalis) with 7.52 points, as well as Nechristo (by Negro) with 7.56.