Pierre-Eric Jaquerod: Dressage Now Needs to be a Spectacle Instead of a Presentation of Expert Knowledge 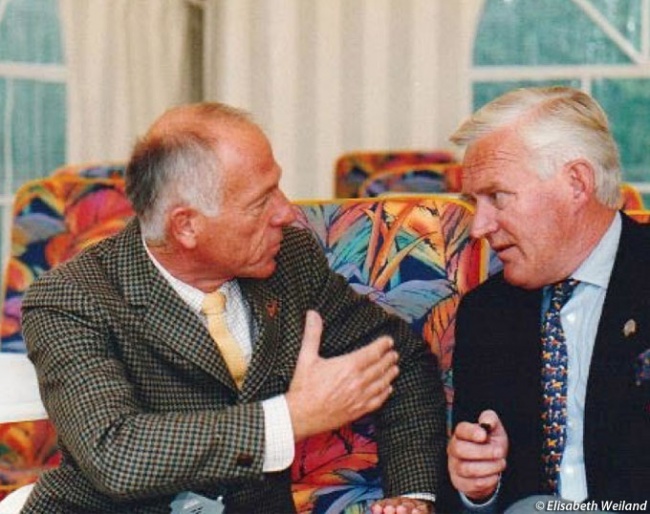 He has closely followed the sports’ major developments for the past 60 years: From a sport dominated by officers to one in which professionalism and commerce now rule.

Silke Rottermann interviewed him for the Swiss equestrian magazine Kavallo at the beginning of 2019.

You experienced more than six decades of equestrian sport from different angles. Which were the most drastic changes in this time period?

First of all, the civilization of equestrian sport after World War II destroyed everything that existed before, like the cavalry schools and horse breeding. Whereas in the past the great majority of competitors were officers, it changed in the 1950s and 1960s. Now the majority were civilians, except in Switzerland, of which the ladies integrated enormously fast and well. Horse breeding lost their main clientele due to the motorization and the mechanization of the armies and it needed to find a new breeding goal. That was the sport horse, thanks to the Miracle on the Rhine and the booming equestrian sport.

The legendary horseman Dr. Gustav Rau (1880-1954) said shortly before his death that judging means "to overcome oneself in favour of justice and truth". How difficult is it sometimes for a dressage judge?

This is generally more difficult than one assumes. Firstly, as a judge one is only a human who, if one wants or not, has sympathies and proclivities. At least it is not easy to push this aside. Secondly, as a judge you are part of a pretty small family in which everyone knows everyone. It is not always easy to ignore this all and judge fairly.

The more you try to be consciously righteous, the less spontaneous you judge and the more unjust it gets in the end. Spontaneous judging requires a profound knowledge of the criteria of training, a schooled eye, as well as the ability to only see horse and rider in that very moment in order to judge the execution of a movement.

Apropos knowledge of the criteria of training: compering pre-war and post-war times one finds significantly less representatives of the judges’ corps who have made themselves a name as rider or trainer before their judging career. Does this affect how these judges judge?

Until directly after World War II the big European cavalry schools were in charge and they had a pretty good exchange. For example the French, the Germans or the Italians all had their own minds and sensitivities, but they trained horses with the same goal: perfection as a result of classical training. One argued indeed about the methods to achieve it, but not about the goal. The cavalry schools trained specialists to become top professional riders, who then later became judges.

International dressage classes were comparatively rare until the 1970s. Today dressage sport has grown enormously so that we need hundreds of judges. To win over only former riders or trainers for judging and t train them in a standardized way, is a big problem as such. Additionally the knowledge and interests in modern dressage sport diverge strongly which cannot be without fallouts on judging. The judges of today are mainly amateurs. They have honest intentions and conscientiously do their work, that is my conviction, but the fewest of them still deal daily with the training and riding of horses. And many only know relevant literature by hearsay.

Today horses which are fairly classically trained are similarly marked like those trained with "new methods." Judges stress that they are only allowed to judge what is presented to them in the dressage arena, but isn’t this sufficient to recognize faulty training, the wrong collection resulting from it and then mark this accordingly?

The training methods are not always clearly detectable, which means that they cannot always be objectively marked. The only possibility to separate the good from the bad is a globally standardized training of judges for knowledge of the single movements. If I do not know the exact definition of a movement, if I do not know what an exercise should lead to, than I am unable to correctly judge a movement. As soon as the judges have different opinions about collection, straightening, bending, etc, it gets problematic because there must not be a leeway. For example, I see appalling pictures how riders pass corners without bending.

Nowadays the formula "spectacular gaits = spectacular marks" too often seems valid. Has progress in breeding turned dressage sport into a competition in which the quality of the horse and not that of training is being assessed?

This is the great danger indeed. With the disappearance of the old guard of judges and good riders like Henri Chammartin, Liselott Linsenhoff, or Christine Stückelberger the young generation looses sight of what is correct .

The same happens nowadays when imperfect photos of top riders get published. The opening of the frame in trot extensions is a wonderful example. Actually a lengthening of the strides should become visible. Instead one often sees "squeezed out" extensions which are spectacular, but simply wrong.

In this relation I have to mention that the "transparency" of current day judging leads to fewer judges having the courage to punish such extensions with a mark below 5, because their judgement is visible for everybody.

During the World Cup show in London 2018 a severely shortened Grand Prix program was ridden. What is your opinion to such pilot projects in order to supposedly make dressage more spectator friendly?

I have a very low opinion of this. But therein lies the big dilemma of the FEI and the national federations! To get international recognition, dressage needs to have audience appeal, but if we have many spectators we have to assume that only a few of them are real connoisseurs of the matter. This means that I cannot thrill a big mass of spectators with hour-long displays and repetitions. As a result I need to shorten and this is most easily done by removing the "unspectacular" movements like the rein-back, the walk and the half-passes. However we have to be aware of one thing: the shorter the program, the shorter the possibility of comparing the horses. And if some movements are only shown on one lead, some things might be hidden.

What is surely reinforced is the aspect of the spectacular and not the display of expert knowledge of training.

The legendary Swedish judge Gustaf Nyblaeus once said that dressage sport only has one goal: to present equestrian art. Hasn’t dressage at least partly been sacrificed to commercial aspirations with the intention to keep it an Olympic sport?

Article 419 of the dressage rule-book says that the FEI introduced dressage competitions with the intention to preserve equestrian art in the purity of its principles. They rather meant to protect it against wrong training approaches. Today the external circumstances and influences are the big danger.

One surely did not intend to sacrifice classical dressage, but it became the victim of different interests and restraints resulting from these interests. May it be those of the riders, the trainers, the judges, the organizers, the sponsors, the TV companies and last but not least the spectators.

This interview had first been published in Kavallo magazine 1-2/2019,, p. 12-14. With friendly permission by Thomas Frei / Kavallo.

Related Links
Pierre-Eric Jaquerod: "Swiss Dressage Has Not Woken Up in Time for Transition"