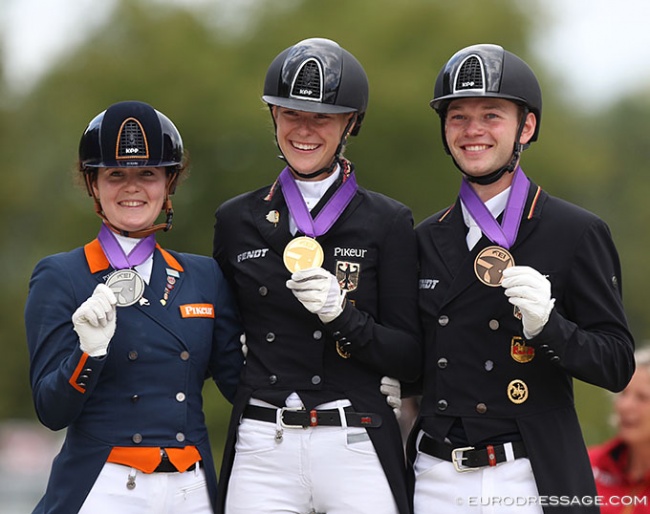 After winning team silver on Tuesday, Germany's Ann-Kathrin Lindner moved to the top of the board in the Short Grand Prix and earned individual gold at the 2020 European Under 25 Championships in Pilisjaszfalu, Hungary, on 19 August 2020.

The 2020 European Youth Championships, hosted at Arie Yom Tov's Stable Unikornis in the Budapest region, consolidates all five youth championships from children to Under 25 over a three-week period. In this 2020 corona year, dressage is the only discipline to maintain its European Championships this year thanks to the generosity of Yom Tov and the Hungarian Equestrian Federation.

Ann-Kathrin Lindner and her 11-year old Baden Wurttemberger bred gelding Sunfire (by San Amour x Freudenfeuer) were the leaders in the German Under 25 selection trials and as team come back kids arrived in Budapest as Germany's biggest hopeful for gold. In the Intermediaire II Team test, they placed second but in the Short Grand Prix it all came together and the surfaced at the top of the board.

The long legged black gelding showed nice trot half passes although the rider sat a bit crooked to the right in the saddle. The passage was now more engaged from behind and regular, while the piaffe is not really true. Although Sunfire keeps a good rhythm, he does not really sit behind and comes close to crossing in front. The extended walk had good relaxation, but could have shown more overtrack. The canter work went smoothly but in the future the quality of the collection canter could be better with more swing in the back. The pair showed very good pirouettes and very nice, easy uphill two tempi changes. In the one's the horse swung a bit to the right. Lindner produced clean, quiet riding that was pleasant to watch. They earned 75.590% for the gold medal and had the judges in unison.

Silver for 2019 European Under 25 Champions

Dutch duo Jeanine Nieuwenhuis and the 15-year old KWPN gelding TC Athene (by United x Jazz) returned to the 2020 edition of the European U25 Championships as the title defenders, after having won double gold and team silver in 2019.

The very tall, chestnut Athene is probably one of the most powerful movers in the Under 25 field. The horse is strong, engaged and ground covering but in all this greatness, it is the collection that is his weakness. The piaffe is almost non-existing, even though the passage has much suspension and airtime. There was no difference between the medium and extended trot, it was all pedal to the metal. All this power was difficult for his rider to bolster and the half halting was far from discrete. The very hand held horse with a lot of pulling and steering, paraded through the arena, shining especially in forward movements such as the fantastic two and one tempi changes, which were brilliant. He got away from his rider in the canter half passes, and the extended walk had no real relaxation, but interestingly in the canter pirouettes, the horse does sit and can produce small ones.

German Raphael Netz and the Werndl family's 12-year old Hanoverian gelding Lacoste (by Locksley II x Wolkenstein II) found themselves surprisingly on the podium for the bronze. After placing fifth in the Intermediaire II, the sympathetic Netz visibly looked shocked yet ecstatic when he realized he had won the bronze.

The pair produced a very appealing, friendly ride with a good bridle contact. The horse has quiet and soft in the contact, even though Lacoste is not ideally built and moving, often with the croup high in the passage and piaffe, yet bouncy and regular in the rhythm.  The extended walk had good overtrack, but the nose needed to be more out and forward. In the pirouette left he struggled to sit behind, but the right one was much better. The one tempi changes were clean and straight, but could have had more ground cover.

The horse appearing on the Under 25 starters' list with the most experience at the highest level was the 2016 Rio Olympic ride Foco Loco W (under Yvonne Losos de Muniz from the Dominican Republic). The 15-year old Belgian warmblood gelding is sired by the BWP stallion Sierappel, who is also competing in Budapest in the European Young Riders Championships under an Israeli rider. Sierappel is  21 years old.

Foco Loco W is the most thoroughly trained, experienced Grand Prix horse of the lost and bring so much quality to the fore. Under his temporary rider, Anne-Mette Strandby, who works at dealing yard Helgstrand Dressage, the bay finished fourth in the Short Grand prix with 72.949%.

The contact with the bit was quiet and consistent, although Foco Loco W was quite rigid in his mouth. The piaffe could have had more impulsion and the horse regularly swayed to the right with the hindleg. The passage was bouncy, the half passes fluent. The highlights of the test were the big tempi changes and the super pirouettes.

The 2015 and 2017 European Junior and Young Rider Champions Hannah Erbe and her now13-year old Rhinelander gelding Carlos (by Carabas x Weltmeyer) were one of the most pleasing pairs to watch.

Soft in the contact, the nose nicely at or in front of the vertical most of the time and with minimal aids, Carlos was up in the bridle and showed lovely, lightfooted passage. The second piaffe was too forward and had not enough sit behind. The extended trots were very pretty with an impressive front leg, but there needs to be more ground covering from behind. The extended walk was mediocre with the nose not going out and little ground cover, but the collected walk was good. The extended canter and flying change were gorgeous, the right pirouette a bit big and one change in the one tempi changes was short behind. The changes were straight and uphill though. Erbe finished with a good, sweet centerline.

What is the Under 25 Division For?

The judging of the Team Championship Intermediaire II test became highly controversial. Eurodressage will cover this matter in a later article based on statistics.

At the end of the Short Grand Prix today, the question that lingered in my head was this one: What is the Under 25 division for? To assess the quality of riding of aspiring international senior Grand Prix riders? Judges them on the quality of their seat, aids and bridle contact and how they translate it into an easier Grand prix test; or is it an assessment of the quality of the horse?? The flashier the horse, no matter the bridle contact, the more points? A lot of horses did not properly piaffe, or those who were stunning movers, were being hand held, ridden with super curb chains and had rigid mouths.  The judges should clearly indicate what they want to see: good riding at Grand Prix level, or future Grand Prix horses being joy ridden by Under 25 riders? Decide!