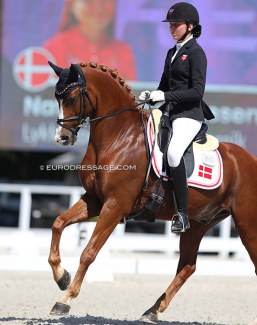 Danish team pony Lykkehøjs Dream of Dornik has been retained for Denmark and sold to a new Danish rider, Jasmin Struntze Torp.

With the conclusion of the 2020 summer show show season, many international FEI dressage ponies will get sold to new riders as many riders have reached the age limit and will need to move onto horses in 2021.

Lykkehøjs Dream of Dornik is an 11-year old Danish Sport Pony bred gelding by Melli's Dornik out of Monika (by Cupkehof's Winobert).

Under Nathalie Thomassen he made his international show debut at the 2019 CDI Sint-Truiden in Belgium, where he won the team test and placed second in the individual and Kur.

With successful starts in the CDI's in Aalborg, Uggerhalne and Hagen, the pair qualified on the Danish team for the 2019 European Pony Championships in Strzegom, where they won team gold and placed fourth in the individual test and seventh in the Kur.

In the turbulent 2020 corona year, Thomassen did not get the opportunity to compete internationally, but via national shows qualified for the team for the 2020 European Pony Championships in Pilisjaszfalu (HUN). The pair won team silver and placed 8th in the individual test and 5th in the Kur.

Sold in June, but Team Opportunity

Due to the raging corona pandemic, the 2020 European Pony Championships, originally taking place in Strzegom (POL), were cancelled in May. Dream of Dornik was put up for sale and sold in June to 13-year old Danish rider Jasmin Struntze Torp.

However, when both the Danish Nationals as well as the European Championships returned on the 2020 calendar, Struntze paid it forward and sent her new pony back to Thomassen.

"I bought him already several months ago, when the corona virus just started and the prospects about the bigger shows as the Danish and European Championship were not good," Jasmin told Eurodressage. "I took over the reins for a few weeks, but when we found out the shows were a reality again, there was no doubt about it: of course Nathalie Thomassen should have their last European Championship together!"

Thomassen and Dream of Dornik will have their last competition ride this weekend at the Danish Team Championships, where they will form a team with European silver medal winner Sophia Obel (Adriano B), Jasmin Struntze Torp (Ine) and Isabell Struntze Torp (Prince).

Jasmin Struntze Torp is no newcomer to pony competition. She has been competing Annabella Pidgley's former British team pony Ine (by Constantin x Handryk) as well as well as the 6-year old German bred Minerva Bijou (by Boomer x Derbino) at national shows in Denmark.

Coached by Mia Lee and Line Tange Jakobsen, Struntze is dreaming big and with Dream of Dornik added to her string she will try for Danish team selection.

"We are very excited," said Jasmin. "With the best help from our coach, I will try to reach international level. I'm dreaming big and am open for all possibilities.