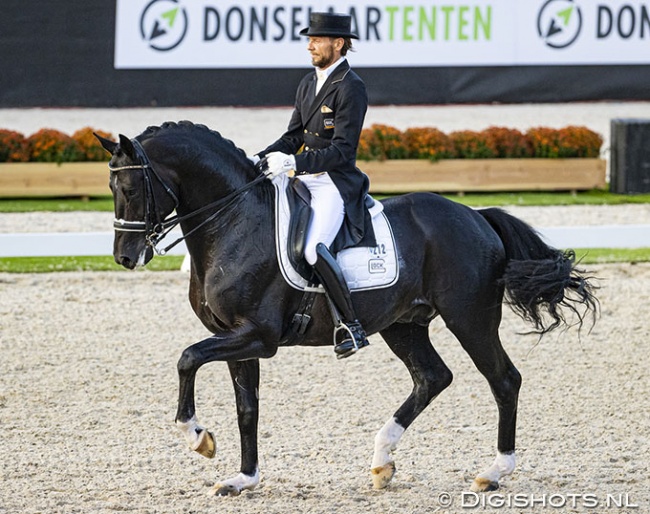 Edward Gal and his rising Grand Prix star Toto Jr took a very comfortable lead in the senior division of the 2020 Dutch Dressage Championships, which are taking place this week at the KNHS headquarters in Ermelo, The Netherlands.

The 2020 Dutch Championships were initially cancelled due to corona, but with measures more relaxed in The Netherlands, the Dutch equestrian federation decided to stage a full blown Nationals for all divisions from Children to Grand Prix, including para dressage.

A limited number of tickets were available for the audience and the bleachers are now as filled as they were at the 2019 Nationals a year ago, i.e. half empty. A big tent for VIP catering has been set up at the show as well and is almost to full capacity.

With 28 riders entered for the big tour, the programme is action packed, especially considering that all A and B squad riders turned out for the event. IN comparison, at the 2020 German Dressage Championships, which are running this weekend as well, only 10 riders are competing in the big tour.

The senior Championships this year are decided by two classes: the Grand Prix on Saturday and the Kur to Music on Sunday. The Grand Prix today was judged by Mariette Sanders-van Gansewinkel, Janine van Twist,  Francis Verbeek-van Rooy,  Mara de Bel Groenenboom, and Adriaan Hamoen.

Edward Gal and the 9-year old Hanoverian stallion Toto Jr (by Totilas x Desperados) headed towards the Nationals as the clear favourites for gold after only one national Grand Prix start in the horse's career. The black stallion takes so much after his sire and there is so much potential in him with three outstanding basic gaits.

In the Grand Prix Special today, Toto Jr showed off a lot of scope and shoulder freedom in the trot extensions, but there was barely any or just one hoof overtrack. In the one on the left he became uneven. The trot half passes had superb crossing of the legs. The highlight of the horse is the passage. It has so much bounce and airtime and very good regularity. In piaffe the horse can maintain an excellent rhythm but he is not really lowering the haunches and moving the hindlegs under the body (which on the other hand makes it easier for him to do smooth transitions). The extended walk was very well regulated with active striding and good lengthening of the frame. The two tempi changes were big and correct but there should be more uphill tendency. In the ones there was a double beat and they were tense. There was a lot of power in the extended canter and the pirouettes were small.

The biggest issue throughout the ride was the consistent tilting of the head to the right. The horse is not evenly elastic on both reins, with Gal keeping a very strong contact with the right rein. This led to a lot of crossing of the jaws, the mouth gaping and early excessive bending before the right trot half pass as well as excessive bending in both canter half passes (even though there was much ground cover).

At the beginning of his (inter)national Grand Prix career, Toto Jr has become a new beacon of medal hope for Dutch Dressage. The judges were thrilled and rewarded the halo pair with marks between 79.043% and 82.128% which averaged 80.681% for a massive lead.

Gal's team mate and life partner Hans Peter Minderhoud became the runner-up with 76.489% and is on silver medal course.

Aboard the 12-year old Dutch warmblood stallion Dream Boy (by Vivaldi x Ferro), Minderhoud rode a very expressive test with trot work that was active and engaged. There was a lot of scope in the extended trots and half passes, but at times the horse got a bit hectic and bopped the head. The extended walk had good relaxation, rhythm and ground cover, but it took a while before Dream Boy stretched the nose. In piaffe there was plenty of airtime, but he got quite narrow behind. The canter half passes were ground covering, the pirouettes small but a bit unbalanced. The tempi changes were an issue today with hiccups in each of three lines. Overall the contact with the bit could be lighter so the horse appears more happy and relaxed in the mouth.

The senior division at the 2020 Nationals featured current and former Grand Prix team riders, who all appeared a bit ring rusty due to a lack of competitions in this corona year.

Dutch team silver medal winner at the 2019 Europeans, Emmelie Scholtens and Desperado (by Vivaldi x Havidoff) landed a fifth place with 72.809%. The pair, who were considered one of the strongest contenders to rival Edward Gal and Toto Jr, did not live up to the expectations. Although the passage work was lightfooted, the extended walk and canter outstanding and a lovely left pirouette, there were too many niggles in the ride, beginning with a jog in the collected walk, some problems finding the rhythm in piaffe, a booboo in the strike off to canter and tempi changes.

After 1.5 years away from CDI showing, former Dutch team rider Madeline Witte-Vrees returned with Cennin (by Vivaldi x Donnerhall) and placed fourth with 72.936%. The tall liver chestnut once more impressed with his trot extensions and extraordinary extended walk, but there was a lot of tilting with the head and some lack of bending, and a mistake in the one tempi changes.

This left plenty of room for Marlies van Baalen to move into third place aboard the 14-year old Dutch warmblood gelding Ben Johnson (by Johnson x Ferro). The bay gelding was on the aids and sharp, showed good trot extensions and half passes, passage work that was off the ground and he certainly has talent in piaffe, but could find the rhythm and balance a bit more effortlessly. Van Baalen made no big mistakes and steered her horse with focus through the test. The judges were a bit divided and rewarded Van Baalen marks between 70.745% and 74.574%, which averaged to a 73.426% and third place.

The 2020 Dutch Grand Prix Championships come to a conclusion on Sunday 20 September 2020 with the Kur to Music.