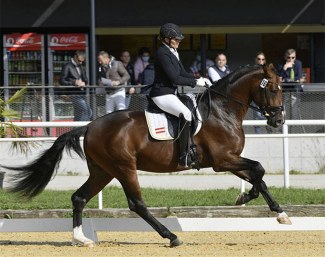 The 3-year old Bartlgut’s Questore and the 4-year old Ewalia’s Rotkäppchen were named the riding horse champions at the 2020 Austrian Warmblood Breeding Championships in Stadl Paura, Austria on 17 - 20 September 2020.

Twenty-seven horses lined up for these classes on Sunday 20 September 2020 and they were judged by Bruno Six (GER) and Ursula Seipel (AUT). The horses were first presented under saddle in their three basic gaits, followed by an in-hand presentation of their conformation. The four best horses were test ridden by guest judge riders Lisa Horler, Sebastian Horler, and Ralf Kornprobst.

In the 3-year old division Edda and Wenzel Schmidt of Gestut Bartlgut celebrated success as their head rider Ulrike Prunthaller steered Questore (by Quaterback) to victory. The guest judge riders both gave the stallion a 10. The stallion is bred by Herbert Stanek out of on of Austria's most successful mare lines, elite mare Toscana II, which also produced the international Grand Prix horse Duccio. The judges scored the stallion 9.9 with 9.5 for canter and 9.0 for general impression.

"It's a horse that's particularly active in trot, with nice freedom in the shoulder. We wanted him to be a more engaged from behind, but the horse is still relatively green. In the canter he's top, so nice, free in the shoulder and uphill, the way the judges like to see it. The walk was not so relaxed. It had a good rhythm, but there was not enough striding through the body," said judge Six.

Traunstein K (by Toto Jr x United) became the reserve champion. Bred by Wolfgang Kromoser and owned by Bartlgut since the beginning of the year, this stallion scored a total of 8.2 from the judges with a 9 for canter. He was described as a modern stallion with a nice expression. He was a bit tense in trot and he was not so happy in the mouth, which pushed the score down a bit. The canter was clearly uphill.

In the 4-year old riding horse class the guest judge riders decided the final ranking of the horses. A total of 15 horses competed in the class and 4 were test ridden. Karin Kosak rode Rotkäppchen to the champion's title with a total score of 8.71 points.  The chestnut mare by Formel Eins x Sir Donnerhall x Rubin Royal is bred by Steiner and Fassold and owned by the Seidl family's Ewalia company. The judges had put her in third place, but the guest judge riders scored her 9.5 and 10 which gave her the lead.

"She's a horse that initially had the hindlegs out a bit but during the test became more supple and fluent in her gaits. In canter she scored well. She had uphill strides and was light in the contact and showed almost ideal hindleg activity. The walk is secure in the rhythm, even though we wanted her to be a more active in it," said Six.

There were two reserve champion this year as two horses scored 8.64 for second place. The mare which scored the highest with the judges, Rose of Killarney (by Honoré du Soit x Rohdiamant x Akzent II), was one of them. Bred by Hedwig Eder and presented by Giualia Schwab, the mare also did well with guest judge riders Sebastian Horler and Ralf Kornprobst, who rewarded her both with a 9.0.

The second reserve champion was last year's reserve champion, stallion Geyer's Ferrero (by Florenz). He finished on a score of 8.64 and got two times 9.5 from the guest judge riders. It was a pity that walk (7.5) lacked ground cover in Stadl Paura or the stallion could have finished higher. He was presented by Heinrich Geyer.