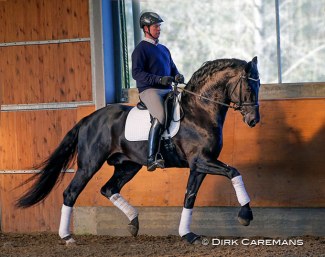 The Belgian bred Rhinelander stallion Special Agent Amour has passed away on 27 September 2020. He was 12 years old.

He was bred and owned by the father-son duo Hugo and Philippe Jorissen in Belgium.

The black was presented at the 2010 Westfalian Stallion Licensing and named premium stallion.

He did his 30-day stallion performance test two years later in 2012 in Schlieckau and scored 8.84 for dressage and 6.98 for show jumping to finish on a total of 8.11 points. He retained his licensed status through sport by qualifying for the Bundeschampionate via a Belgian show in October 2013 on a score of 75.40 points.

Successful Sport Career as a Youngster

Special Agent Amour had a super start in sport as a youngster.

Under owner Philippe Jorissen he got selected to represent Belgium at the 2013 World Young Horse Championships in Verden, where he was 27th in the preliminary test (7.08) but had to be retired in the consolation finals.

Special Agent Amour injured himself while breeding in 2015 and it meant the end of his sport career.

Although Special Agent Amour was not widely marketed as a breeding stallion, he was quite liked by breeders. In Germany he has 14 offspring registered for sport. He has no licensed sons.

Special Agent Amour mainly catered to the Belgian market mainly after getting BWP approved in 2011. Several of his still young offspring have made their mark in sport already.

Special Agent Amour passed away untimely. He started to colic and was transported to the equine clinic, where he was operated on.

"Special had a rupture in a blood vessel in his liver. We think he rolled and got his intestine stuck between the pancreas and liver. The intestine moved back into the right place, but ruptured a vessel. We only found out the cause on the operation table and his chances for survival were very slim. We are all in shock and can't believe it. What started out as a breeder's dream turned out into a nightmare," Jule Jorissen told Eurodressage.

Jule continued, "fortunately we still have several of Special's children playing around here at the yard."