Choose the Type of Rider You Want to Be - On Corona Scores, Keysoe, and Friendly Dressage 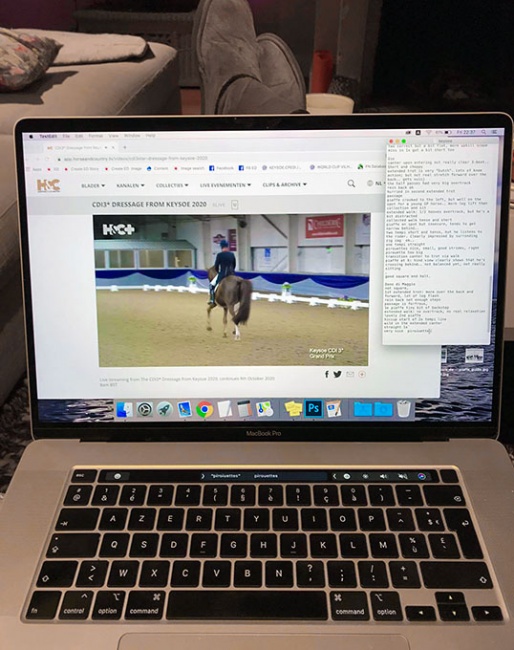 Dressage enthusiasts, craving for some action at world class level in competition, have gone cold turkey this 2020 corona year with one CDI after another getting cancelled. Those rare few internationals that have survived on the calendar bring together a finger-licking-good starters field which any aficionado does not want to miss out on.

With no spectators allowed and competition venues closed to any non-essential team members, online live streaming has received a new found appreciation from dressage junkies that need their dose of top sport.

In July the CDI Hagen brought Germany's elite together. Next week, Denmark's best will ride in the World Cup in Vilhelmsborg and for some Dutch action, one had to watch the Dutch National Championships in September.

The 2020 CDI Keysoe was the first opportunity to watch the British elite take centre stage this year with all of Britain's finest on the starters' list (with exception of Laura Tomlinson and Lottie Fry, who rode at the CDI Hagen two weeks ago).

One clear, significant trend that has been observable this 2020 corona year is that new words are enriching man's vocabulary. A new sense of being has been brought about by the corona pandemic and new terminology has sprung up.  Everyone across the globe has become familiar with terms such as "corona kilos", "lockdown fatigue", "covidiot", "skin hunger", "cough shame" and "dehoarding" but for the dressage world one can clearly state that "corona scores" have become en vogue.

Either it is clear ring rust of the judges, who have been confined in their homes for too long with no consistent judging practice, or they are in such a state of euphoria to be released from their homes and returned to their boxes, but they apparently see life through pink glasses; the glass is not half full but pouring over, the thrill of the come back to competition is so great that scores are given, especially to big name riders, like Christmas presents.

The trend has long existed: The mistakes and flaws (due to inexperience) from talented, upcoming horses presented by big name riders are excused and scored much more generously than when no-names present fancy, new horses but don't have their act under control. It's a regrettable facet of a judging sport, but this year it is taking mind boggling proportions.

It happened in Hagen (whopping scores for fault ridden tests by top riders) and it happened at the Dutch Championships.

For the classical dressage purist, it was close to masochism to watch the live stream of the Grand Prix at the Dutch Championships. So many tense horses, squeezed and cramped into the contact, having melt downs in the arena. Sure there was a significant lack of competition routine which affected these highly sensitive Grand Prix partners, but from a riding point of view it revealed a more fundamental problem of having a training system not based on relaxation and lightness, but on spectacular riding under pressure where the end justifies the means. Fortunately there was a handful of Dutch riders who were pleasant to watch and the presence of talent and quality in those Dutch horses in Ermelo was beyond any doubt.

The big difference between watching Ermelo and Keysoe - for those who were willing to burn the (mid)night oil watching the Grand Prix at the CDI Keysoe (which took place from 19h until 23h15) - was the riding and horsemanship! At Keysoe many horses (and riders) appeared out of show practise, their horses grenates about to explode in the indoor arena, or they just did not have the mileage and strength yet to string all the GP movements in a faultfree way together. No problem, but at least the riding was friendly and sympathetic. The bridle contact was with respect for the horse and the nosebands were not pulled so tight that their horses were suffocating. It was proof of solid riding and with a much clearer vision of what dressage has always meant to look like.

Choose the Type of Rider You Want to Be

At the 2019 European Championships in Rotterdam, British team rider Gareth Hughes told me: "choose the type of rider you want to be" and adapt your riding to that image you want to portray.

I think this a cue that should ring in every rider's head, every day when! As a human, as a person, as a rider, we make a very conscientious choice with every action we take.

Dressage is difficult. We all know that. And often we stand with our backs against the wall, not sure what to do, which technique to try, how to solve a problem. In these bottleneck moments, choose what type of rider you want to be. Do you want to whip your horse because it's not quick and active enough, because it refuses to load on the trailer? Do we stick it with spurs over and over again to make it go forward, instead of re-thinking what we are doing in front with the bit? When you tack your horse, close the noseband, and decide to tighten it a hole, your first reaction  should be: what have I done wrong that I'm now trying to quick-fix with the noseband?

Are you willing to take the long route and make your dressage look easy and friendly? Or is your ego so big you are not willing to work on yourself, your lack of knowledge, your personal weaknesses. Force begins where knowledge ends.

I actually started writing a show report about the CDI Keysoe but it turned out into this editorial. The Keysoe Grand Prix report will follow soon..