Carina Cassoe Krüth Purchases Own Yard, to Move in Spring 2021 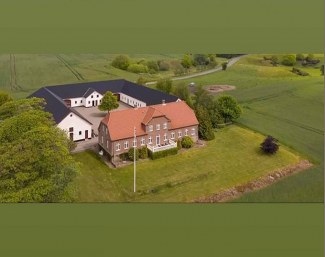 Carina (née Reslow Krüth) knew a life with horses was meant for her and after high school she immediately started her Bereiter programme. Trained by Per Skjaerbaek she initially worked at the Arden Riding Club before becoming independent with CK Dressage. She married Casper Cassoe Jakobsen, the director of the Danish warmblood society, in 2013.

The 36-year old took her first steps towards international fame when she successfully competed Ingrid and Poul Thøgersen's Danish bred mare Heiline's Danciera (by Furstenball x De Niro) in the World Young Horse Championships three years in a row. In 2019-2020 the mare made her big break through at Grand Prix level and the pair got short listed for the Danish Olympic team. She is coached by Andreas Helgstrand.

The Cassoe Kruth couple has now decided to make their step to full independence and purchased their own yard near Mariager, Denmark.  They will move in the spring of 2021 and slowly integrate the horse business as renovations move along.

"We are moving in spring 2021 after renovations and then slowly starting to build an indoor and stables," Kruth told Eurodressage. "When the time is right and everything finished we will move my business there."

Traditionally agricultural yards in Denmark have a name that often returns in a horse's name to mark the breeder/yard. The new property the Cassoes bought was a cattle farm.

"It has always been used for farming and cattle, so there will be some rebuilding inside the stables, so it will fit for top sport horses instead of cows," Carina smiled, "but the best part is the beautiful nature and loads of space surrounding the property, which I think my horses deserve."