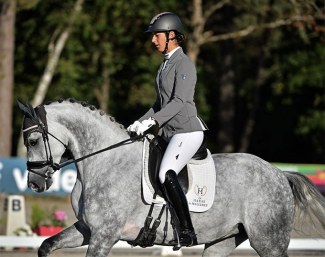 The 27-year old Pauline Guillem has been a successful French youth team rider, beginning on ponies and moving up to Under 25 level.

In 2011 she made the transition to junior level with Whisper Gold (by Gribaldi x Wanderbusch II), who took her to the 2011 European Junior Riders Championships and then to Young Riders level in 2012-2014.

Between 2014 and 2017 Guillem did not compete internationally but she returned to the CDI show scene in 2017 at medium tour level with Whisper Gold. The pair competed only very lightly at international shows, their last being in July 2019. In 2018 the pair won bronze at the French Under 25 Championships.

Guillem began riding horses for Malleret in 2020, including Barcelona de Malleret (OLD, by Bretton Woods x Diamond Hit), with whom she placed fifth at the 2020 French Young Horse Championships.

She will bring Floyd Pepper, Romulus and Barcelona and will get training from Annick Dauban and Hans Heinrich Meyer Zu Strohen.