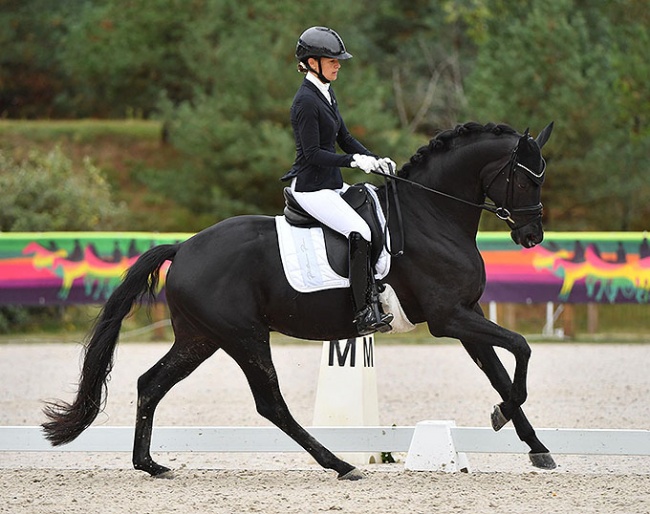 The French Young Horse Championships are traditionally hosted at the National Equestrian Centre in Saumur, but in this corona year they were relocated to Fontainebleau.

No less than 30 horses competed in the 4-year old division, which was won by Jessica Michel-Botton aboard Philippe Heussen's Oldenburg bred Maximus Jung HP du Wincke (by Morricone x Florencio). The ruled the roost and won all three rounds, the first presentation under saddle (92.00 points), the in-hand presentation to assess the conformation (87.50 points) as well as the second, final ridden round (92.40 points) to finish on a total of 91.833%. The black is bred by Philippe Jung.

The silver medal went to Australian Rebecca Rooke aboard her own and Patrick Bernuchon's Oldenburg mare Muschamp Quelle Classe (by Quaterbold du Payrol x Herzruf). The pair had a bit of a whirlwind tour in Fontainebleau, finishing fifth in round one (83.00 points), but only 21st for confirmation (77.50 pts). However they made a stellar surge in the last round and ranked second with 85.00 points to finish on a total of 83.712 points.

Pauline Guillem and the Hanoverian bred Loudzi Gold (by Livaldon x Scolari) landed the bronze medal with a total of 83.394 points. The pair was sixth in the first round (82.80 pts), 11th for the conformation (80.00 pts) and third in the finals' round with 84.20 points. The dark bay is owned by the company SCI Cotard Ivestissement.

Aboard Xavier Marie's Oldenburg registered Djembe de Hus (by Damon Hill x Argentinus) she won the title and gold medal with a total score of 91.469 points. Djembe de Hus dominated the first round with 91.200 points, scored 87.50 for his conformation (4th) and then won the second, final round with 92.000 points. This is Djembe's third, consecutive French Young Horse Champion's title.

Jessica and the Oldenburg bred Goldenromance Malleret PS (by Governor x Sir Donnerhall) finished with the bronze medal on 85.406 points. They were third in the preliminary test (83.80 points) and third in the Finals (86.000). The chestnut earned 87.50 points for conformation (4th). The liver chestnut is bred by Paul Schockemöhle out of his prize mare Gesina and is owned by the breeder in partnership with Haras de Malleret.

The 6-year old division was slightly smaller with 15 combinations.

Antonin Schuchard and the Hanoverian bred Ninjago (by Negro x San Remo) had their hopes high for a gold medal after winning the first round (82.00 points), but dropped to a third place in the Finals (79.00) to finish on an overall 80.000 points for bronze.