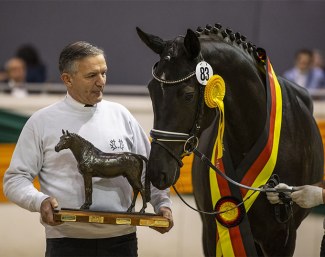 Helene was proclaimed Trakehner Mare of the Year 2020 at the annual Trakehner Stallion Licensing in Neumunster, of which the 2020 edition takes place on 15 - 18 October 2020.

It is tradition for the winners and reserve champions of the regional registrations to travelling to Neumünster for the championship of the Mare of the Year. In 2020, there were eleven 3-year-old Trakehner ladies presented to the judging trio with Dr. Thomas Nissen, breeding director of the Holsteiner Verband, Leonie Bramall, internationally successful dressage ridser and Matthias Werner, member of the commission to register Trakehner mares.

The title went to the typey and strongly moving premium mare Helene (by Helium x Kaiserdom), bred by ZG Rüdel and owned by Helmar Bescht. It hasn’t been the first time for her to conquer the hearts of judges and spectators alike. She was the winner at the registration of the Lower Saxony/Hanover breeding district as well as champion of the riding horses in Münster-Handorf and finalist at the Bundeschampionat of three-year-old mares and geldings at Warendorf.

Dr. Thomas Nissen was thrilled with Helene. He said: ”This had been a very special presentation, from the first moment. She is a super athlete, with spectacular movements and an ideal model with best proportions. Everything fits in this prototype for breeding and sport. Breeding such an impressive product is rare to happen“.

Nightingale is familiar with Holstenhalle. She was the most expensive auction horse as a two-year-old among broodmares last year, selling for 70,000 euro.

The daughter of Helium x Camaro, bred by Heike Ditzel and owned by Swiss Adrian Gasser, knew how to show her ability to move impressively.