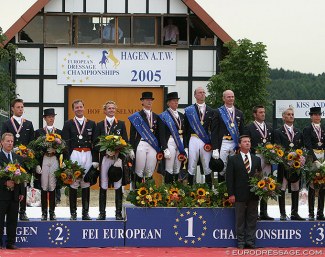 Budapest was allocated the 2021 European Championships for Jumping, Eventing, Dressage and Para Dressage from 23 August to 5 September 2021.

However, the date proximity to the rescheduled 2021 Olympic and Paralympic Games in Tokyo meant it was no longer feasible to run Jumping, Dressage and Para Dressage at the scheduled locations in the city of Budapest.

The new dates for the Tokyo Olympic Games are 23 July to 8 August 2021 and the Paralympic Games will run from 24 August through to 5 September 2021.

On 8 May 2020, the FEI announced that the 2021 European Championships for Dressage, Show Jumping, Para Dressage in Budapest, as well as the European Eventing Championships in Haras du Pin, France, were cancelled.

At the time the FEI stated: "The FEI Board has agreed that the bid process for the European Championships 2021 in these four disciplines will not be reopened, as all organisers would face the same challenges of trying to host major Championships so close to the Tokyo Games.

FEI secretary-general Sabrina Ibanez said at the time: “Together with the Organising Committees of both Budapest and Haras du Pin, as well as the Hungarian and French National Federations, we have examined every possible option to try and save the Championships in 2021, but we have reached the regrettable decision that it simply is not possible to have these important events so close to the Olympic and Paralympic Games next year."

The FEI believed that the September 2021 dates for a Europeans  right after the 2021 Olympics would not offer the "level playing field."

“While there are some nations that have enough horsepower to send strong teams to the Olympic and Paralympic Games and also to the European Championships across the four disciplines, we have to offer a level playing field to all eligible countries and we simply cannot do that in this case, so we have agreed that the focus should be on Tokyo next year," it read in the May FEI press release.

With the corona pandemic having upset the entire 2021 equestrian competition calendar and the majority of continental championships as well as the Olympics cancelled, the sport and equestrian economy received a massive blow.

The European Equestrian Federation began its lobbying campaign over the summer to push for a re-instatement of the 2021 European Championships. The date proximity with the postponed Olympics and the FEI's "level playing field" were no issue to the EEF.

Theo Ploegmakers, the president of the EEF, argued that "many federations are of the opinion that the sport is best served, when concentrated on a continental level with the European Championships as the ultimate goal."

Ploegmakers continued, "even when the Olympic Games in Tokyo go ahead, the European Championship is for the vast majority of EEF Federations the most important event in 2021. While it is not customary to hold two major tournaments in a year, the EEF is calling on the FEI to make an exception for 2021, as the extraordinary circumstances we are going through require extraordinary measures.

Today the FEI announced that the allocation of the FEI Dressage Championships 2021 was confirmed to Hagen, host venue to major international events annually, pending final confirmation from the Organiser.

"Confirmation of the decision on the two Championships came at yesterday’s FEI Board meeting, held via videoconference," the FEI press rlease of 21 October read. "The FEI Board, with the full support of the European Equestrian Federation (EEF), agreed that in view of the rescheduled Olympic and Paralympic Games and the huge amount of planning involved, if either of the venues is unable to host these Championships, the bid process for 2021 will not be re-opened."

The Championships will be entered into the FEI Calendar for 7-12 September 2021.

In its own press release the FEI admitted to conceding to the lobbying of the EEF.

"Following the postponement of this year’s Tokyo Games to 2021, the FEI Board had previously ruled that European Championships in the Olympic and Paralympic disciplines should not be held next year to allow the focus to be on Tokyo. However, the EEF and a number of European National Federations urged the FEI Board to review its decision, resulting in yesterday’s resolution," said the FEI.

The Team of Hof Kasselmann in Hagen, Germany, has proven to be able to stage a world class Championship in a minimum amount of time after it saved Moscow's biscuit when the Russian capital pulled the plug out of the 2005 European Dressage Championships just weeks before the event.

In less than 6 weeks time, Kasselmann was able to create ideal conditions at his yard in Hagen and staged a brilliant Europeans. Hof Kasselmann will be ready to deliver once again in 2021.

“These (2021 European) Championships have really been a great example of the FEI, EEF, the German National Federation, the two Organisers and everyone else involved working together to accommodate the wishes of the European National Federations and the Athletes’ community to have these Championships next year," said FEI president Ingmar de Vos. "I am particularly grateful for the valuable work done by the FEI Technical Committees and Calendar Task Forces.”

There will be no FEI European Eventing Championships in 2021 as the organisers that had put in expressions of interest to host the Championships subsequently withdrew from the process. The FEI European Para Dressage Championships will also not take place in 2021 to allow athletes to focus on the Tokyo Paralympic Games.

Although not mentioned in any of the two press released (EEF in September, nor today's FEI press release), the underlying gist of the message seems to be that both the FEI or the EEF fear the 2021 Olympic Games will not take place.

The 2021 European Championships will, therefore, be the motor to keep competition sport driving, with or without Tokyo.