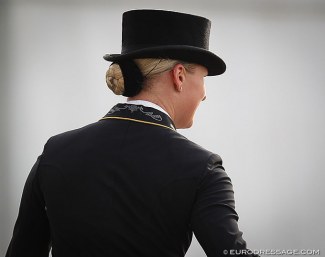 The top hat petition, launched by Isabell Werth and other top 100 Dressage Riders, has come too late according to FEI protocol to request a rule change at the 2020 FEI General Assembly.

At the FEI General Assembly in Moscow (RUS) in November 2019, the decision to disuse top hats was taken by a majority vote of the FEI National Federations. Helmets will be the mandatory headgear for dressage as of 1 January 2021.

However last week a group of top dressage riders, supported by the International Dressage Riders Club (IDRC), made their petition public in which they boasted 151 signatures of world ranked riders. The petition is their formal demand to the FEI to keep the option to use the top hat for Senior competitors at CDI4*/5*, Games and Championships on GP level and to bring their request for a rule revision on the agenda of the 2020 FEI General Assembly on 23 November 2020.

The FEI has confirmed to reporter Pippa Cuckson that the mandatory protocol for rule change requests has not been followed.

“The petition with the athletes’ request for this to be added to the agenda for next month’s General Assembly was sent to the FEI by International Dressage Riders’ Club president Kyra Kyrklund last week," an FEI spokesperson stated. "However, as the FEI did not receive any request to change this rule during the period of the rules consultation process, neither from the IDRC nor National Federations (NFs), the item has not been included on the General Assembly agenda for a vote."

March 1 is the annual deadline for proposed rules revisions, after which nothing new can be added. NFs and stakeholders have the opportunity to comment on the first draft of proposed Rules changes, but not to propose anything new.

“It is now too late to submit anything new for the 2020 General Assembly due to statutory deadlines to which we need to adhere," said the FEI spokesperson.

Rider and Show Reps on the FEI Dressage Committee

The FEI is made up of 137 national federations (NFs). Consultation documents published on 26 October 2020 before the FEI General Assembly show that not one NF has indicated it opposes the new helmet rule.

As the FEI has no mechanism in place for last minute rule revisions, the riders hoped a petition might do the trick.

Two riders have a seat on the FEI Dressage Committee, Beatriz Ferrer-Salat as the Athletes Representative and Patrik Kittel as the Show Organizers Representative. Both Olympians signed the petition, but did not make the formal request for rule revision before the 1 March 2020 deadline.

Eurodressage wondered why these representatives, as well as the petitioners, waited until the autumn of 2020 to take action.

"Most of the riders were not informed about this (original helmet rule) change (in 2019) and I think it came as a big surprise for all," Kittel told Eurodressage.

Beatriz Ferrer-Salat added, "we (Patrik and Beatriz) brought the subject (of top hats) in different meetings, but we always got the answer that it was already approved and there was nothing we could do."