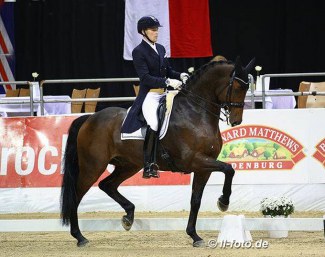 Finnish team rider Henri Ruoste and his own and Jochen Arl's Belgian warmblood gelding Kontestro DB showed their skill and talent by posting another personal best score at the 2020 CDI Oldenburg on 29 October - 1 November 2020.

The 2020 CDI Oldenburg was one of the few international indoor competitions still standing on the 2020 calendar, which has been upended due to the corona pandemic. With only select CDI show opportunities available, a solid field of 18 competitors from four different nations gathered in Oldenburg to be assessed by a panel of four 5* judges (Andersson, Ebert, Colliander, Wüst) and one 4* judge (Peutz).

"He always gives an amazing feeling," Henri told Eurodressage. "I feel he’s getting stronger and stronger in his body. He has an amazing balance, which for sure makes life easier. As he is a bit of an over achiever anyways, we have been doing a lot of basic work at home."

The strapping 10-year old Belgian warmblood Kontestro DB (by Contendro x Cassini II x Julio Mariner xx) is on a spectacular trajectory, from appearing at local shows in Belgium as a youngster and now surging on the FEI World Dressage Ranking as a world elite Grand Prix horse.

Bred by Ronny and Rio de Beule-van Holle in Oosteeklo, Belgium, the bay gelding was first based with jumping/dressage duo Herman van den Broek and Ingrid Daeleman, before moving to Belgian young horse rider Nick van Laer to be developed as an eventer. However, the quality of the horse's gaits were so convincing that Van Laer's life partner Linda Meisch took on the ride and trained him to small tour level. The pair finished fifth in the 7-year old Finals at the 2017 Belgian Young Horse Championships in Gesves.

German horse dealer Jochen Arl discovered Kontestro from a video in 2018. He purchased the horse on the spot after the try-out, sharing ownership with Ruoste, with whom he has been collaborating on the training and sales of exclusive dressage horses since 2010.

Kontestro moved to Henri's yard in Germany to be developed to Grand Prix.

From Strength to Strength

Ruoste introduced Kontestro DB to international Grand Prix competition only in February 2020 at the CDI Le Mans and they have gone from strength to strength since then.

They competed in Dortmund and Hagen this spring and summer and with each start the scores have jumped a few percentages higher. They began with a 72.891% debut score and are now at a 76.745% personal best score, achieved in the Special at the CDI Hagen in September.

Thanks to his double victory in Oldenburg, Ruoste and Kontestro made a stellar rise on the FEI World Dressage Ranking, moving from a 122nd place into the World Top50, standing on 48th place at the moment.

Kontestro's current score rank him amongst the highest scoring Grand Prix horses in the world and there is much more in the tank. This has generated much interest from buyers who search for Olympic quality and potential.

The uncertainty of winter shows due to Covid-19 make it hard to draw concrete competition plans. Henri's gaze is looking at the future as he said "I will start to make a fitting freestyle for him." They hope to get in for the CDI 4* Salzburg in Austria.