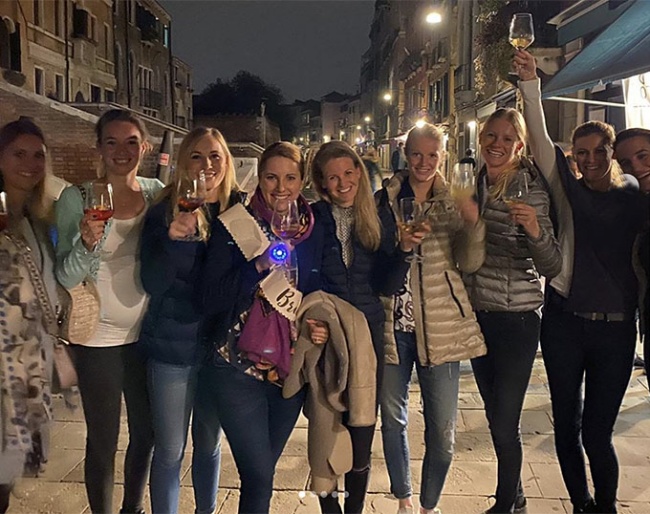 The 31-year old rider, who owns Gut Daxau in the south of Germany, runs her training business together with Nielsen (31), who is an international show jumper.

One month ago, Michalke invited her best girlfriends to a bachelorette weekend, first with a stop in Erding, Germany, and then off to Venice, Italy. Fellow riders, such as Fabienne Lutkemeier, Ann Kristin Dornbracht, Annabel Frenzen, and Senta Kirchhoff, attended.

Nielsen proposed in November 2019 and the wedding was scheduled for January 2021, but corona has thrown a spanner in the works.

"It was a very special and great moment, but Denis said it's very hard to find the right moment," Vicky told Eurodressage about getting proposed to. "We wanted to get married in January but due to corona we probably have to find a new date!"

Michalke was a member of the German team at the 2007 German Junior Riders Championships in 2007 aboard the licensed stallion Rubioso N.

She made her international Grand Prix debut on Grand Augustinus (by Grand Cru x Augustinus xx) and then gained her Grand Prix mileage on Pavarotti (by Ferro x Saros xx).

Her most successful horse so far is the mare Novia (by Stedinger x Alabaster) which she showed at the 2012 World Young Horse Championships in Verden, where she finished 6th. In 2016 they hit the Grand prix division and with this mare she was briefly squad listed.

As of 1 January 2017, Victoria and her partner Denis have been running Gut Daxau together as a business. Nielsen was an assistant trainer at Gestut Sprehe for almost 10 years before moving in with Michalke.

Victoria's last international start was in July 2019. In 2020 Victoria has mainly focused on competing a string of young horses at national shows. Novia's last competition start was in February 2020.