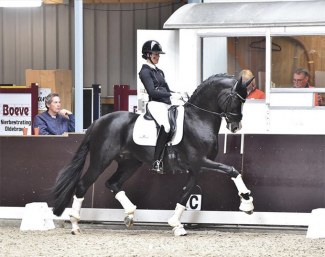 The KWPN licensed stallion Janeiro Platinum will not be competing for The Netherlands at the 2020 World young Horse Championships in Verden, Germany. He has been sold to Sweden.

The KWPN stallion by Sezuan x UB40 x Ferro was selected for the Dutch team with Danish Anne Mette Strandby, who won the 2020 European Under 25 Championships in August.

They will be replaced by the first reserves, Nicky Snijder on Jongleur STH (by Expression x Fürst Heinrich).

Rejected by KWPN, Accepted in Oldenburg/Denmark

Janeiro Platinum is bred by and was originally owned by the discredited Singaporean- Indonesian entrepreneur Titan Wilaras.

He was presented for licensing with the KWPN society but rejected for his walk. He was accepted by the Oldenburg society.

Janeiro sold as a 4-year old to Andreas Helgstrand in Denmark and was accepted for the Danish warmblood society. He scored 850 points in his Danish Stallion Performance Test with an 8.5 for walk.

He has been rejected as a breeding stallion by the Hanoverian society.

As a sport horse, Janeiro has been very lightly competed.

In 2018 he only did one qualification show with Hannes Lütt and then went to the 2018 Danish Young Horse Championships, where he finished 8th in the first round and was withdrawn from the finals.

In June 2019 he returned to the show ring under Anne-Marie Hosbond. They did one local show and then the qualifier for the 2019 Danish YH Championships. They stranded in 17th place in the preliminary round at the 2019 Danish Young Horse Championships and did not make it to the final round.

In 2020 it was Strandby Hansen who did the same routine: compete in one qualifier for the Danish Nationals for the entry ticket. The pair won the class with 97.4 %. The 2020 Danish Young Horse Championships, however, have been cancelled due to Covid-19.

Although slow burning in sport, Janeiro Platinum's career seems to have taken flight this year with his WCYH Dutch team nomination and especially in breeding, with an exceptional 2020 crop of foals that became hot sellers on the market.

The stallion will be trained and competed by Sofie Lexner to ride, who is the head trainer at Christinelund Dressage, owned by Linden Urnes. Lexner trains with Patrik Kittel.

"We have over time bought several horses at Helgstrand Dressage," said Linden-Urnes, "among others Felina Lightfoot by Floricello x Onassis and Kavira by Franklin x Sorento."