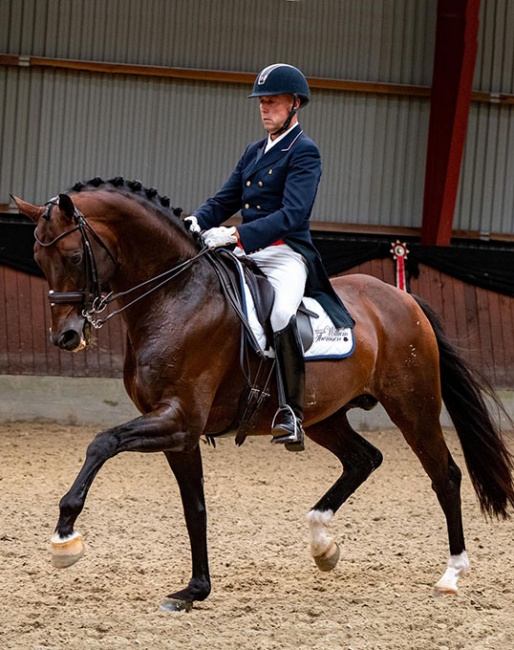 Joachim Thomsen and Rune Willum sold the 10-year old Atterupgaards Seebach (by Sandro Hit x Caprimond) to Danes Allan Bøgelund Laursen and Camilla Lunderskov. The bay stallion was a premium licensed stallion as a 3-year old and first trained by Michael Sinding and Selina Solberg Vittinghus before selling to Thomsen/Willum in January 2018. The horse has competed at national small tour level in Denmark.

Dutch dressage riders Joyce Lenaerts and Marcel Sterrenburg got married after being a couple for 24 years! The pair tied the knot on 3 November 2020 in a small ceremony due to corona. "Only six people were allowed to be present in town hall and I didn't want a dress anyway and especially not with so few people there," Lenaerts told De Hoefslag. The couple owns and runs sales and training stable De Beukenvallei in Leende near Eindhoven and have one son together, Stan. A big party will be thrown once the corona measures are lifted.

Irish Grand Prix rider and breeder Heike Holstein has been decorated with the Horse Sport Ireland "International Breeder Prize" for Dressage for 2020. HSI awards it to the breeders of the top three Irish-bred horses in the World Breeding Federation for Sport Horses (WBFSH) year-end rankings in Show Jumping, Eventing and Dressage. Holstein's home bred Sambuca (by Samarant (HANN) out of (Astoria (ISH) by Limmerick (HOLST)) was the dressage winner.

U.S. Grand Prix rider Katherine Bateson-Chandler has added a new youngster to her string of horses, the 3-year old KWPN mare Monetta (by Ferdeaux x Koss). The bay mare was trained in the Netherlands by Maria Anna Kwinten Digman.

At the 2020 DSP Saddle Licensing at the Marbach state stud seven colts were presented and four licensed. The champion of the saddle licensing was the only dressage bred stallion that got approved: Franz Jacob (by Franziskus x Diamond Hit). he was presented by Dagmar Reiter. At the auction following the licensing, the approved pony stallion Mr. Jingles (by FS Mr. President x Creston Dundee) sold for 17,500 euro to the Conijn family in The Netherlands.

Brittany Stanley has secured the job of assistant trainer to head rider Michael Bragdell at one of America's biggest dressage stallion stations, Hilltop Farm in Colora, Maryland. Stanley will be replacing Jess Fay, who worked as a rider at Hilltop for six years. Stanley spent the last 4 years training in Denmark including 3 years spent with Michael's longtime coach Morten Thomsen. "As the head rider for Morten, she broadened her knowledge from starting young horses to educating horses to Grand Prix," said Hilltop Farm. "She has used those skills to develop her own training & sales business in Denmark, but now also feels like the right time for Brittany to come home to the US."