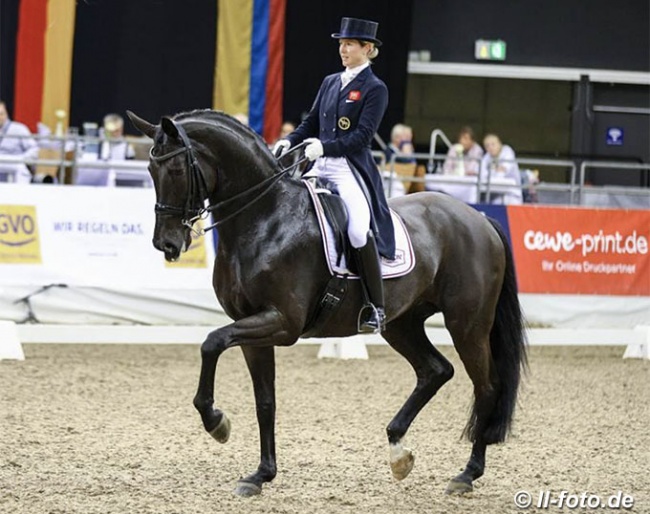 British dressage riders are coming out full force at the belated 2020 British Dressage Championships, which in this corona year have been rescheduled for 21 - 22 December 2020 at Hartpury.

From Somerford to Hartpury

For 2020 the British Nationals were supposed to move from its usual venue, Stoneleigh, to Somerford Park in Cheshire, where the event was scheduled to be hosted the next three years.

With the most prestigious international hosted on British soil, the London Olympia Horse Show, cancelled due to corona, a slot opened up on the calendar for the British Grand Prix Championships to take place after all.

The original dates were 24 to 27 September 2020, but they were changed to 21 - 22 December with the corona pandemic upending the entire calendar.

Also the venue has been changed. The Nationals won't be ridden in Somerford but will take place in Carl Hester's backyard at Hartpury Equine Collage.

The 2020 British Championships will be a real treat as almost the entire British A-squad will be competing based on the entry list at hand.

Laura Bechtolsheimer (Rose of Bavaria) and Lara Butler (Rubin al Asad) as well as 2018 WEG team rider Emile Faurie (Dono di Maggio) are on the list.  They will be joined by a pregnant Hayley Watson-Greaves on Rubins Nite, amongst many others.

Remarkably absent are Gareth Hughes with team ride Briolinca as well as second iron in the fire KK Woodstock, as well as Richard Davison with Bubblingh.

The Dutch based Charlotte Fry is not making the trip across the Channel with her two GP horses Dark Legend and Everdale due to corona and Brexit.

There will be two rounds to the Nationals: the Grand Prix and Kur to Music.

Thirty combinations will compete in front of Stephen Clarke, Andrew Gardner, Clive Halsall, Peter Storr and Isobel Wessels in the Grand Prix. The best 15 will move on to the Freestyle.

Carl Hester could secure his 11th title, Laura Tomlinson her fourth, and Emile Faurie his third.  Dujardin, Watson-Greaves and Butler are all attempting to win the Grand Prix Championship for a second time.