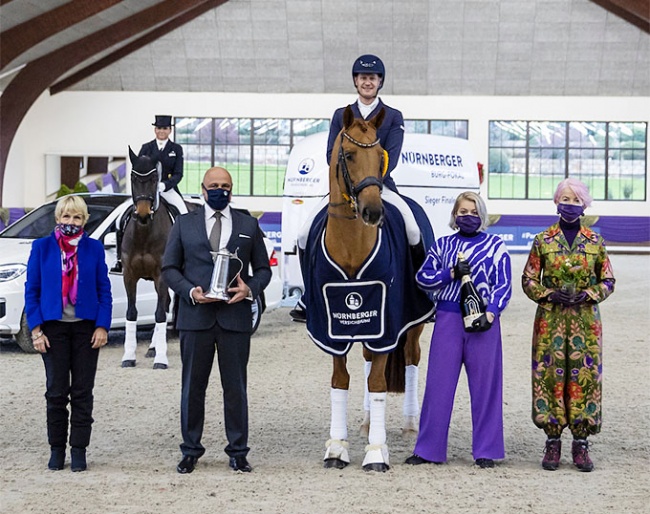 The corona pandemic upended the competition calendar this year and the Nurnberger Burgpokal qualifiers started two months later than normal. The kick off was planned for Horses & Dreams in Hagen in April, but the started in Essen-Herbergen in June.

Twelve qualifiers were held throughout Germany the spring and summer season and the winners of each qualifier were eligible to compete at the Finals. Normally the finals are held in Frankfurt, but moved to Schafhof behind closed doors due to COVID-19 restrictions. Ann-Kathrin Linsenhoff generously opened the doors to her stable for the Louisdor Cup Finals, Nurnberger Burgpokal Finals and Piaff Förderpreis finals.

Rath's 7-year old Hanoverian stallion Destacado (by Desperados x Londonderry) was one of the youngest finalists in this year's Burgpokal crop and ended up on top.

The pair placed fourth in the warm up round with 75.171%. However in the finals the judges panel, consisting of Germany's five 5-star judges Evi Eisenhardt, Henning Lehrmann, Katrina Wüst, Ulrike Nivelle, and Elke Ebert, favoured the pair's ride the most and rewarded it with a winning 76.268%.

Destacado is a gorgeous chestnut stallion with a big neck, expressive face, and three outstanding basic gaits. In the Finals he stayed a bit horizontal in the trot extensions and could have sprung more off the ground, but his extended walk was exceptional. He executed a small walk turn to the left, which could have been more energetic, in the right one the first step was a bit big. Destacado revealed his youthful age in the canter work. The canter half pirouettes showed much potential for shortening the stride and collection, but the balance was not there yet. The horse's head bopped in the canter work which comes from  a lack of strength and self carriage due to this age. However, he was very obedient and with his rider all the time. The four tempi changes swung in the hindquaters, the threes appeared better.

Rath was thrilled with his home victory, his second Nurnberger Burgpokal title after winning the first one in 2014 on his wife Franziska Eisenmann's Es Fangar Samba King.

"It's a great feeling, a special feeling to win the Burgpokal," said Rath. "It's rare to achieve it and I did it twice, now once here and that in this (corona) year. I'm very proud and happy of our team to have achieved this."

He was particularly pleased with how Destacado coped with the task.

"There weren't any big mistakes (in my ride), there was a bit of tension in the tempi changes. He is only 7, don't forget that. Every year he has achieved the season goal. Desti truly is an exemplary student," Rath explained. "He offers everything incredibly quickly and it's up to me not to do too much with it and ask too much. You need to step on the brake to really allow him to develop, both in strength and in his mind."

Destacado was discovered by Ann-Kathrin Linsenhoff during a wine tasting with Hans-Jürgen Fitschen, who told her he and his wife had bought a horse in Verden upon his brother's recommendation. Fitschen told Linsenhoff to have a look at the young chestnut and the rest is history.

For a long time, the first starters in the Finals round, Dorothee Schneider and Sissy Max-Theurer's Oldenburg mare Sisters Act MT OLD (by Sandro Hit x Royal Diamond) were in the lead with 75.732%, but in the end were pipped by Destacado.

Originally named Sisters Act von Rosencarree, the dark bay mare has been in training with Schneider since she was a youngster and was successfully competed at the World Young Horse Championships, before selling to Max-Theurer. The mare won the warm up round of the Burgpokal finals (76.707%) and made herself the title favourite.

In the Finals, the mare showcased her impeccable training even though she lacked some pizzazz and forward go. The trot work was solid, but she could have shown a bit more elasticity and bending in the rib cage. The walk was a bit hurried in the tempo, but got better on the diagonal with good overtrack, even though there could have been more of a V-moment in the rhythm. Sisters Act showed good relaxation and stretch over the back in the extension. However, in the collected walk she came close to ambling and lacked impulsion in the right turn on the haunches. After that she broke into canter and had to a flying change to correct the lead. The half pirouette to the right was lovely, the four tempi changes were correct, but could have been more up and forward. All flying changes looked a bit laboured, with the threes being executed the smoothest. The extended canter was good. Overall the mare looked a bit tired and slow in the Finals round, but her training and presentation were excellent. The judges went for it and put the pair second.

Schneider is one of the most decorated Burgpokal riders ever, having qualified no less than 18 horses for the finals and clocking two wins already. This year she qualified three horses (!!) but opted to leave at home her third ride, Lordswood Dancing Diamond, with whom she scored the highest qualification mark. She opted to ride the two Max-Theurer owned horses which she has had in training for longer.

Norwegian Isabel Freese qualified two horses for the Finals and placed third and fourth with them. Aboard Paul Schockemöhle and Lone Boegh Henriksen's 9-year old Hanoverian stallion Fürsten-Look (by Furstenball x Londonderry) she placed third on 75.683%.

The gorgeous black stallion has three outstanding basic gaits and has developed well into the FEI level work. In the trot extensions he showed mega ground cover and cadence, going full throttle. The extended walk was superb, but in the collected the stallion got slow and lost rhythm, which compromised the quality of the turns on the haunches and made the collected walk lateral. Fürsten-Look showed much sit and the pirouettes which having great scope in front. In the canter half pass to the right, the hindquarters trailer a bit. The tempi changes were delightful, especially the changes to the right. Also the extended canter was uphill. If not for the collected walk, this horse would have won.

Freese and the 8-year old Totilas look-a-like Top Gear (by Totilas x Don Frederico) were fourth with 75.293%. The black had nice crossing of the legs in the half passes, but could have shown more overtrack and stretch in the frame in the trot extensions. The extended walk had much overstep but was not entirely relaxed with the horse getting distracted. Top Gear showed great ability to sit and collect in canter, but the changes to the left were crooked. Overall the horse looked a bit cramped in front and would benefit from a more open frame.

Swedish Malin Wahlhamp-Nilsson rode Masahiro Kosaka's 8-year old French bred Oldenburg gelding Dedale de Hus (by Don Juan de Hus x Furst Heinrich) to fifth place with 75.024%. The black gelding has much cadence and spring in troth and produced great lengthenings. The extended walk was good and clear in the rhythm. In the canter the stride length is not the greatest and he lacked some bending in the right pirouette , but overall the horse was very obedient and worked with his rider.

The most correct and high quality presentation in the 2020 Nurnberger Burgpokal finals probably came from Finnish Emma Kanerva on 8-year old Oldenburg registered Mist of Titanium (by Millennium x Diamonit). Bred in Finland by Riverbank Horses and owned by Emma's sponsor gert Saborowski, the dark bay showed a powerful scopy trot. There was good relaxation in the extended walk, but lost some impulsion in the left turn on the haunches. This big and powerful horse could be a bit more supple overall, but he show cased small, well collected half pirouettes and was in good balance in canter. The first change of the 4-tempi line had a bit of a double beat, but the threes were nice and there is uphill tendency in the flying changes.

Swedish Patrik Kittel and the 8-year old Swedish warmblood stallion Touchdown (by Quaterback x Sack) landed seventh place with 74.439%. The bay stallion executed very elegant trot half passes with lots of shoulder freedom and big trot extensions. The walk had a good, clear 4-beat rhythm and the turns on the haunches were very nice. There was also a very nice, quiet preparation for the canter half pirouettes. The tempi changes still appeared laboured and Touchdown should sink a bit more in the croup in the canter work. It was a nice, clean controlled ride, but overall the poll needs to stay more consistently as the highest point. The stallion is owned by Swedish Anna Maria Forslund with Patrik retaining the ride for the future.

Schneider and Max-Theurer's 8-year old Rhinelander stallion Villeneuve (by Vitalis x Dancier) could easily have been winners when it comes to quality offered, but there were too many bobbles to rank higher than an 8th place with 74.098%. This gorgeous chestnut stallion is naturally uphill oriented and is beautifully trained, a Schneider trademark. However, there was a loss of rhythm in the first trot extension, an unscripted flying change before the canter pirouette right and some issues in the flying changes. The second extended trot, however, was mega, the canter pirouettes beautifully ridden, and there was a perfect halt before the reinback.  The flying changes to the left still are more difficult, but the ones to the right were very nice and uphill.

Hubertus Schmidt and Gut Neuenhof's 7-year old Hanoverian stallion Vainqueur (by Vivaldi x Rubioso N) finished 9th with 73.976%. The large-framed chestnut with his big neck still looks a bit young and wobbly/wonky and needs more time to develop and mature. Schmidt remained quiet and patient throughout the ride, as the horse seemed unable to give it its all. The extended trot was on the forehand, the extended walk had minimal overtrack, the turns on the haunches were big and hesitant and the tempi changes short. In the pirouettes Vainqueur tried his best and has the potential to collect. Schmidt rode the horse with long reins in a soft contact.

Completing the top 10 were Stefanie Wolf on Johann Hinnemann and Thomas Voss' Oldenburg gelding Matchball (by Millennium x De Niro). The 8-year old black gelding is very correctly trained and as one of the first starters in the class, were not yet enjoying the more generous scores given at the end. There was nice suspension in the half passes, the extended trot was uphill oriented. In the turns on the haunches, the horse gets a bit wide behind. The canter pirouettes were nice and small but in the tempi changes the horse was a bit tense and he missed one change in the threes. There was also some tension in the rein back. They scored 73.244%.